Long trusted for its improvement of mood and focus, GABA turns out to excel in building more lean mass when added to whey protein

KYOTO, Japan--(BUSINESS WIRE)--Pharma Foods International Co. Ltd. has made available for publication its first-ever studyproving that supplementing a post-exercise whey protein regimen with their naturally-produced flagship product PharmaGABATMproduces an increase in the body’s already existing resting serum growth hormone level, consequently boosting the formation of lean muscle mass. This officially opens a path connecting regular intake of GABA to a naturally beneficial and balanced nutritional profile for the athletic lifestyle.

GABA (γ-Aminobutyric acid) is an amino acid that functions as a key inhibitory neurotransmitter, and is central to cellular activity in the human nervous system. Although GABA’s specific anabolic effect remains undefined, what this study now proves is that oral intake of PharmaGABATM along with whey protein, a known means of stimulating skeletal muscle hypertrophy, enhances the process and produces demonstrably more lean mass than with whey protein alone.

The study looked at 26 males, aged 26 to 48, who practiced progressive-resistance weight training. The group was divided in two — all ingested 10 grams of whey protein daily, half supplemented it with 100 milligrams of PharmaGABATM. The group trained twice weekly, following a systematized circuit of weight-resistance exercises. Resting serum growth hormone was recorded in blood plasma at baseline, four, eight, and twelve weeks; while change in muscle mass was measured using dual-energy X-ray absorptiometry (DXA) at baseline and twelve weeks. The result was that while GH improved significantly for the group ingesting whey protein, the improvement quickly leveled off, whereas the addition of GABA demonstrated proliferation of GH throughout the entire period, and at the end of twelve weeks, lean mass was dramatically increased in the group taking both together.

Pharma Foods International is a leader in the production of GABA, long an admired nutritional supplement for its role in positively affecting such neural functions as relaxation, stress reduction and focus. Its PharmaGABA TM is naturally-derived using lactobacillus hilgardii, used for centuries in the preparation of foods like Korean kimchi. PharmaGABA TM is featured in dozens of products in Japan, reflecting both the public’s confidence in its effectiveness and in the high standard of manufacture that Pharma Foods International has come to represent. 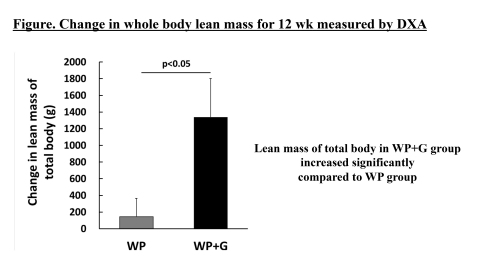