Described as a realistic experience that is one of its kind in the world, the ISLAEX19 is based on unexpected scenarios where the teams of the ISA countries will operate according to different security theories and strategies in order to test the readiness of the international teams in facing security threats. The exercise also aims to assess the tools, strategies and procedures developed by the ISA countries since the paunch of the Alliance in 2017.

The first day exercises began with a sudden TV announcement of a security threat in a virtual country. As per the set scenario, participants received reports about a group targeting this virtual country with several attacks. Participants from specialized teams were deployed to chambers dedicated to the training field as per their specialties including security analysis and tactics, risk management and operations, amidst simulated attacks and threats.

Specialized task forces communicated the information and news compiled about the attacks to field commanders to enable the proper decision-making. Response to the threats was carried out based on the security scenarios that have been adopted during the International Security Alliance’s workshops, which provided proper training to ensure a joint participatory actions to achieve the desired goals and promote prompt response and preparedness to such security events.

Teams worked in perfect harmony in the Operations Room set up for this exercise, to come up with the most appropriate security practices to respond to the security threat according to plans. 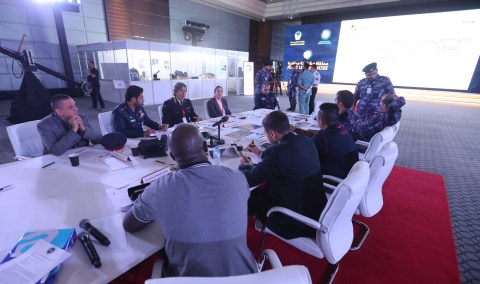