Sharjah Biennial 14 Kicks off under the title: Leaving the Echo Chamber

SB14, held this year under the title ‘Leaving the Echo Chamber’, will feature three distinct exhibitions; Zoe Butt’s exhibition Journey Beyond The Arrow; Omar Kholeif’s Making New Time and Claire Tancons’ Look for Me All Around You.

SB14 features over 80 established and emerging artists from around the globe, including over 60 new commissions, as well as many never-before-seen works that will displayed in various locations across the emirate of Sharjah, the Mureijah Square and the Arts Square, as well as in SAF’s studios in Al Hamriyah, in the East Coast city of Kalba and other spaces in Umm Al Quwain.

The Sharjah Art Foundation is also organizing the 12th edition of the March Meeting 2019, from 9 -11 March, 2019 at the Sharjah Institute of Theatrical Arts in Al Mureijah, which will include panel discussions, performances, films and artistic productions, in line with the themes of the three exhibitions at SB14.

SB14 will also feature independent film screenings for film lovers in the UAE; as well as educational programs, aligned with this year’s theme ‘Leaving the Echo Chamber’.

Programs intended for adults and children include workshops on photography, drawing, writing and theatrical performance. Other workshops for ‘People of determination’ provide a variety of topics on photography skills, puppetry, drawing, musical instruments and Islamic art; while the schools and youth centers’ program offers a set of workshops and field trips on topics such as abstract art, architecture and storytelling.

SB14 is made possible through the generous support of Van Cleef & Arples (Gold Sponsor) and Crescent Petroleum (Silver Sponsor). In-kind support is offered by Sharjah Municipality, Sharjah Roads and Transport Authority; Sharjah Electricity and Water Authority; Bee'ah, the Dubai Economic Department; the Institut Français in the UAE and the Institut Français in France.

The Sharjah Biennial is the most important cultural event in the Arab world and, since its inception in 1993, has been instrumental in supporting the arts landscape in the UAE and the region. 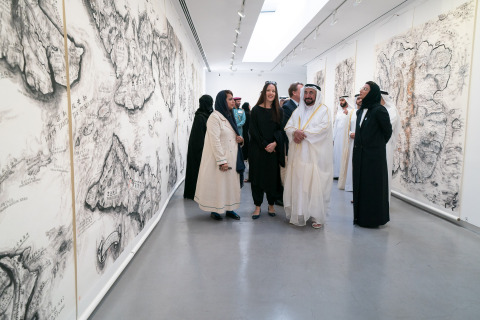 Over 80 artists and over 60 new commissions at SB14 (Photo: AETOSWire)