Also known as “Fazza” by his 7.2 million Instagram followers, Sheikh Hamdan’s futuristic speech was a spectacular display capturing the futuristic ambitions of the emirate in a theatrical setting worthy of a Prince for the future.

Sheikh Hamdan said future cities should provide 80 percent of all services within 20 minutes of their residents, and horizontal farms will feed the world’s growing population.

The seventh WGS also learned that Dubai aims to become a driverless city in 50 years. Speaking of which, the Roads and Transport Authority’s (RTA) latest driverless transport was on display. His Highness Sheikh Mohammed bin Rashid Al Maktoum, UAE Vice President and Prime Minister, and Ruler of Dubai jumped aboard to review the futuristic Sky Pods with his son Sheikh Hamdan. The Pods use 5 times less power than existing systems and can travel at 150km/h.

In the era of “fake news” Nathaniel Barling, CEO and Editor-in-Chief of the disruptive news startup Knowhere claimed: “If news is the chief architect of our social and political reality, it is impossible to rely on humans to provide news that is less biased and less partisan – that is what AI is for.”

Meanwhile, the rise of China and the impact of Brexit are developments now challenging western economic supremacy, a roundtable on global trade was told. 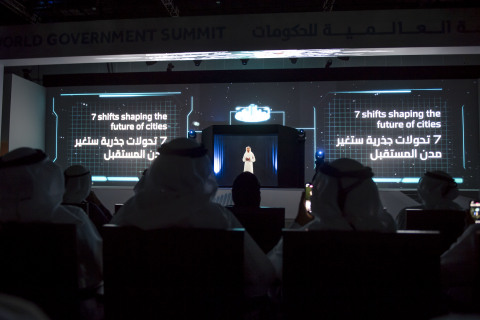 Vision of the Future. Crown Prince of Dubai, Sheikh Hamdan bin Mohammed Al Maktoum appears in holographic form to show the world what cities of the future will look like (Photo: AETOSWire)