The “Document on Human Fraternity for World Peace and Living Together” seeks to encourage stronger relationships between people to promote coexistence among peoples and to confront extremism and its negative impacts.

During the ceremony His Highness Sheikh Mohammed bin Rashid Al Maktoum also presented the first “Human Fraternity Award – From Dar Zayed” that was jointly given to Pope Francis and the Grand Imam.

The award was given to Dr. Ahmed at-Tayyeb in recognition of his firm position in defence of moderation, tolerance, global values and his vehement rejection of radical extremism.

Pope Francis meanwhile is well known as an advocate for tolerance and the laying aside of differences and for his determined call for the pursuit of peace and fraternity among humanity, and the award recognises this continued commitment and approach.

In a speech before signing the Abu Dhabi Declaration, Pope Francis said "hatred and violence" in the name of God cannot be justified, praising the value of education in reducing conflict.

Meanwhile Dr. Ahmed At-Tayyeb, who is one of the world’s foremost Muslim leaders, called on Muslims to protect Christian communities in the Middle East and for Muslims in the West to integrate into their communities.

"You are part of this nation... You are not minorities," he said during his speech at the ceremony.

The ceremony was part of the broader Human Fraternity Meeting that has witnessed the first ever Papal visit to the Arabian Peninsula and hosted by the UAE Government. 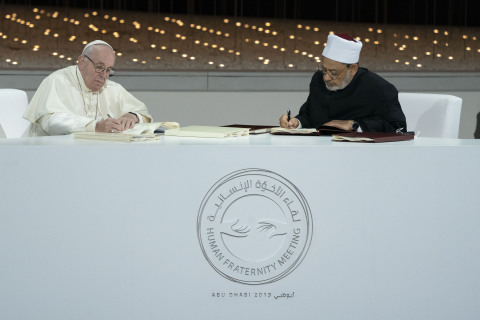 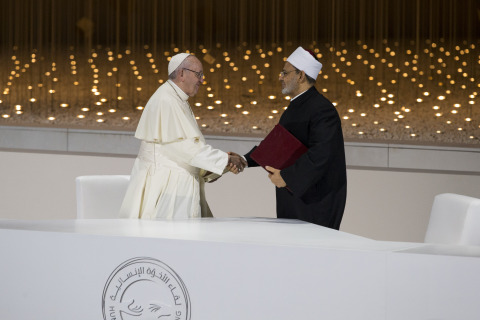