Conference discusses key themes and hosts visits of His Holiness Pope Francis, Head of the Catholic Church and Sovereign of the Vatican City State, and His Eminence Dr Ahmed El-Tayeb, the Grand Imam of Al Azhar Al Sharif, to UAE
Al Remeithi: Gathering reflects importance of promoting a global culture of peace and reinforcing the key concept of citizenship

ABU DHABI, United Arab Emirates--(BUSINESS WIRE)--The ‘Global Conference of Human Fraternity’ opened with a welcome from HE Sheikh Nahyan bin Mubarak Al Nahyan, the UAE’s Minister of Tolerance, to an event that “encourages compassion, respect and understanding among different communities, cultures and religions”, and a call to “counter extremism, prejudice, hate, aggression, greed, and oppression that violate the very idea of human fraternity.”

Taking place under the patronage of His Highness Sheikh Mohammed bin Zayed Al Nahyan, Crown Prince of Abu Dhabi and Deputy Supreme Commander of the UAE Armed Forces, the conference is convened by the Muslim Council of Elders, an Abu Dhabi-based independent international organisation headed by His Eminence the Grand Imam of Al Azhar Al Sharif, Dr Ahmed El-Tayeb, to discuss the encouragement of fraternity as a core human value.

Dr Sultan Faisal Al Remeithi, Secretary General of the Muslim Council of Elders, said: “This distinguished forum in Abu Dhabi reflects the important cultural and humanitarian role that the UAE plays in promoting a global culture of peace and reinforcing the key concept of citizenship while remaining respectful of diversity and tolerance of different faiths.”

The conference is being held in conjunction with the inaugural visit of His Holiness Pope Francis, Head of the Catholic Church and Sovereign of the Vatican City State to the UAE. Under the theme “Make me a Channel of Your Peace”, Pope Francis’s visit – the first of its kind to the Arab Gulf region - represents a call for global fraternal collaboration based on peaceful dialogue and cooperation, mutual tolerance, and a rejection of extremism and violence.

Highlights of the day included two sessions devoted to exploring “Principles of Human Fraternity” and “Common Responsibility for Achieving Human Fraternity” through insights from senior government, religious and intellectual leaders on the critical importance of promoting fraternity, tolerance and citizenship awareness as ways of preventing extremism and conflict.

The first session, chaired by Her Excellency Noura bint Mohammed Al Kaabi, UAE Minister of Culture and Knowledge Development, featured an all-female panel of experts discussing the role of women in achieving productive cooperation filled with trust, respect, and love. The second session featured a call by Rabbi Michael Schudrich, Chief Rabbi of Poland, for mutual tolerance based on every individual’s understanding of how others may see things differently, including everyone’s path to God.

Both sessions were framed by intensive workshops on tolerance, humanity and coexistence, which discussed ways in which fraternity could be reinforced and spread as a global value. Among the many topics discussed at these workshops was the need for peaceful coexistence as every man, woman and child wants access to peace, justice, dignity, cooperation and most importantly love as shared traits among humankind. Delegates also stressed the practice of human fraternity as a foundation for collaboration across different nationalities and religions. 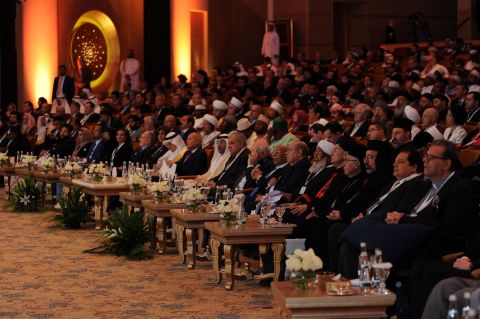