LONDON--(BUSINESS WIRE)--Far from being the universal banking giants of Wall Street, London, Frankfurt, Paris, Tokyo or Beijing that typically combine commercial and investment banking activities, the best banks in the world are focused on consumer and business banking. They are also smaller and often younger than the big brands of the banking industry. So says a new study from global banking research firm, Lafferty Group, London.

These best-performing banks are dotted all over the world and are more likely to be found in the emerging markets of Asia, Africa, Eastern Europe and Latin America than in the developed countries of Western Europe, Australia or North America (see appendix B).

These are some of the headline findings of the latest Lafferty Banking 500 benchmarking study of listed banks from over 70 countries across the globe. The giant ‘elephant in the room’ question raised by the study is this: why are the leading Anglo banks of the US, Canada, UK, Ireland, and Australia at BEST average players? See Appendix A for the star-ratings of the world's largest universal banks.

Lafferty Banking 500 rates banks from 72 countries for their overall quality. This year 500 banks are benchmarked, compared to 100 in each of the previous two years.

The study does not take the form of a report. It is a vast database with 19 separate metrics for each of the 500 banks. It is used by banks and others as a bank benchmarking tool.

The Lafferty Banking 500 awards star-ratings to each bank that is benchmarked – from 5 stars for the best to 1 star at the other extreme. The methodology rates banks for their overall quality and sustainability - and has nothing to do with credit ratings. It uses 19 separate metrics to score the banks and relies almost entirely on their annual reports for the source data. “In many respects our work is based on what can only be described as signals given out by annual reports - signals that are there regardless of how much a bank might try to disguise them. 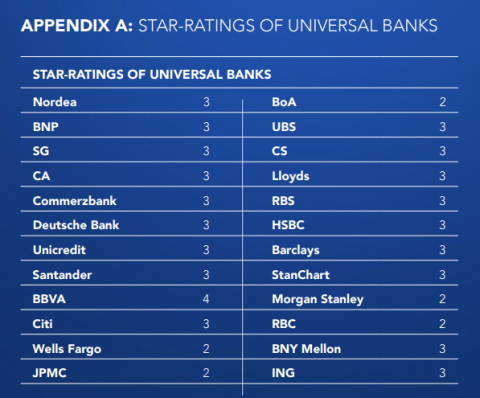