Fuelled by economic trends, including the boom in trade and tourism between the UAE and China, concerted efforts of Dubai’s higher education institutions and Chinese recognition of Dubai degrees, universities at Dubai International Academic City (DIAC) continue to witness significant growth in their Chinese student population.

As Dubai’s key education hub, DIAC has taken several steps to attract Chinese students, including the launch of a programme offering 600 annual scholarships and grants for Chinese students at its universities in the academic year 2017/18. Recognising the need to equalise qualifications, recent agreements between China and UAE have enabled greater levels of collaboration in higher education and student exchange, meaning educational degrees obtained in Dubai will be recognised in China. This, along with the ability to obtain visas on arrival to Dubai, has attracted a lot of interest within the international Chinese community.

Further easing the way for international students, on 20 May 2018, His Highness Sheikh Mohammed bin Rashid Al Maktoum, Vice President and Prime Minister of the UAE and Ruler of Dubai, announced the landmark UAE Cabinet decision to replace the current one-year student visas with five-year visas and, in case of exceptional students, up to 10-year visas.

As a result, students can now tap into the growing pool of employment prospects for Chinese nationals in the UAE. Chinese companies with Dubai-based Middle East headquarters include Huawei and the China State Construction and Engineering Corporation (CSCEC), the second-biggest contractor in the UAE with 16 projects worth US$2.94 billion currently under execution. In addition, a 49 per cent year-on-year increase in the number of Chinese visitors to Dubai in 2017 has opened multiple job opportunities in the tourism sector.

Mohammad Abdullah, Managing Director of DIAC said: “As the world continues to shift its gaze eastwards, we are following suit, acknowledging and harnessing the increased prominence of China on the global economic landscape. Dubai provides a safe and welcoming environment for Chinese students without the prohibitive costs or distance associated with many other international education hubs.”

He added: “Looking ahead, we are confident that enrolment by Chinese students will continue to rise as Expo 2020 attracts even more of the country’s workers and tourists to our city, strengthening the UAE-China alliance.”

Having recently opened the first campus outside the UK and counting influential Chinese citizens, such as the geologist Li Siguang to its list of alumni, the University of Birmingham is currently home to more than 3,000 Chinese students across its campuses with numbers rising year-on-year. Degrees in disciplines such as Business, Economics, Computer Sciences, Mechanical Engineering and teacher training degrees are particularly sought-after at the university. With China being an important market, the renowned British university has now a dedicated team of recruiters that are based in Guangzhou and Shanghai to ease the application process for Chinese students.

For his part, Dr Vajahat Hussain, CEO of Amity Middle East, a leading private non-profit group offering globally benchmarked education from pre-school to PhD level, said: “With approximately 100 million increasingly affluent 18 to 22-year-olds, China is a very attractive market for the world’s education providers. In 2017, we partnered with DIAC and KHDA to offer 300 scholarships to Chinese students with the aim of ensuring that 20 per cent of our cohort originates from China by 2025. As Chinese students look to the West to complete their higher education, Dubai offers a compelling proposition, especially in light of the new student visa initiative announced in 2018.

Amity University Dubai has reported a 50 per cent boost in admissions from China, taking the total number of Chinese students enrolled in the current academic year to 120, with most specialising in management, tourism administration, and hotel management. The academic institution now has a dedicated Mandarin-speaking staff on board to cater to the increased demand for Chinese students

Heriot-Watt University Dubai, the pioneering UK University with a campus based in Edinburgh witnessed a 200 per cent surge in Chinese enrolment in the academic year 2017/18, bringing its headcount up to 110 students. The university offers 50 scholarships a year to Chinese students and has a student recruitment team in Beijing. Professor Ammar Kaka, Provost and Vice Principal of Heriot-Watt’s Dubai campus, said the Chinese students who come to Dubai enjoy studying in one of the world’s most rapidly developing cities. They like Dubai’s fast-paced lifestyle as well as its Chinese restaurants and shopping at Dragon Mart. Many are pursuing their MBAs at the university.

Meanwhile, the University of Wollongong in Dubai (UOWD), the international branch campus of one of Australia’s top 10 higher education institutions, has over 100 Chinese students – up by more than 40 per cent over five years, primarily enrolled in business programmes. The university noted that the recent agreement between both nations has given Chinese students the flexibility to complete half their course curriculum in China and the remainder in Dubai, a setup that appeals to many.

Middlesex University Dubai, a renowned UK university, has also steadily stepped up Chinese enrolment and now has some 35 students from the country. Studying a wide range of disciplines from business and film to education and psychology, its Chinese students are favourably inclined towards Dubai for its safety and cosmopolitan character. 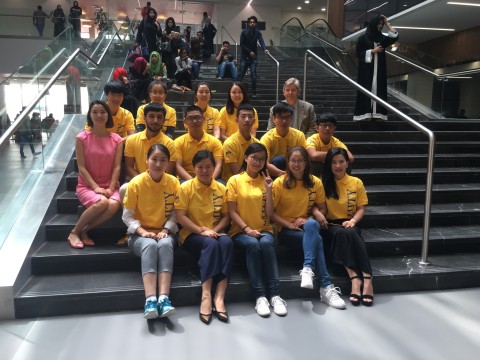