Dr. B. R. Shetty, Chairman, NMC Healthcare and Finablr, said, “In the Year of Zayed, there isn’t a better way for me to express my gratitude to the merits the late Sheikh Zayed brought upon this nation, which I have called home for 45 years. He was the symbol of kindness and tolerance, the foundation blocks of this great nation. It was a real honor to be a part of the film that exemplifies the great leader.”

A team of professionals played key roles of Estimrariya. Renowned Franco Paroni took on the role of Director of Photography, while Indian filmmaker Arun Shekhar contributed as the creative consultant. The grandfather’s voice was rendered by UAE’s own revered actor, Mansoor Al Feeli. Music is composed by Jakes Bejoy; and the editing is done by Sarath Usha Sasidharan. The film also involved Sandhya Shekhar as Executive Producer, Yavar Eskandari on Make-up; and Ihsan Al Shalabi as stylist.

Ullas R. Koya, writer and director of film adds, “The purpose of this film is to inspire people to learn from the past and apply the great teachings of Sheikh Zayed in their daily lives. His message of peace, tolerance, and giving will always remain relevant in our pursuit to create a better world. I am thankful to Dr. B R Shetty for being a part of our initiative.”

Dr. Shetty has previously played the role of King Dharmaraja in the documentary ‘Saga of Benevolence’ and is producing the epic ‘Mahabharat’, the costliest Indian movie ever made.

The link for the movie: https://goo.gl/A6UkT7 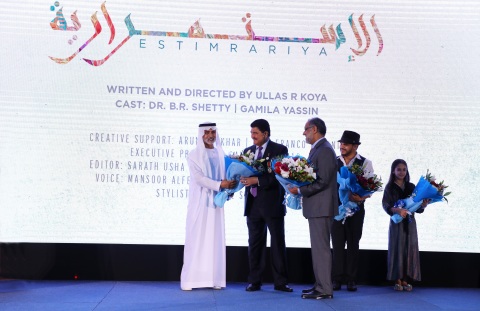