most half of global respondents are skeptical or indifferent to science – however, optimism and expectations for the future of science overall remain high

ST. PAUL, Minn.--(BUSINESS WIRE)--Science needs a champion. This is the conclusion 3M has come to following analysis from its first annual State of Science Index (SOSI), a global study exposing the general population’s attitudes towards science. At first glance, results from the study suggest sentiment towards science is overwhelmingly positive: half of respondents believe flying cars will become a reality within their lifetime and 87 percent characterize science as fascinating, not boring.However, upon further inspection, the survey reveals many people are unaware of the impact science has on their lives: almost 40 percent believe everyday life would not be much different if science did not exist (38 percent). A pattern of skepticism around science also prevails. The study found that almost one-third (32 percent) of the global population is skeptical of science, and 20 percent distrust scientists.

The independent, 14-country State of Science Index was commissioned by 3M (MMM), a global science and innovation company, and conducted by Ipsos, a global market research firm. The study explores the image of science around the world. Respondents were asked about their knowledge, understanding and appreciation of science, as well as questions about the image and future of science.

“We set out to get a pulse on what the general public thinks and feels about science and its impact on the world. Is science valued and trusted, or is it unappreciated?” said John Banovetz, chief technology officer at 3M. “These rich insights put a spotlight on science and reveal differences in attitudes between emerging and developed countries, men and women, and even cross-generation. The world is becoming more technologically advanced every day and science is driving those technology breakthroughs. We hope that by making the survey data available and accessible, we will inspire science champions and future scientists everywhere and bring a greater appreciation of science to the world.”

Key insights from the study

Full study data, including individual country breakdowns across 14 countries and the ability for individuals to explore the data further can be found at 3M.com/scienceindex.

Optimism for the future of science

Despite skepticism and a general misunderstanding about science, excitement for the future of scientific advancements is high. When asked about what they believe science will achieve in their lifetime, the top responses included robots in every workplace (64 percent), robots in every home (55 percent) and flying cars (51 percent). Additionally, there were expectations for undersea living (41 percent) and inhabiting Mars (35 percent), all within our lifetime.

“Even great scientific advancements are the product of multiple discoveries over years of work,” said Banovetz. “If students think that only geniuses can have a career in science and people remain indifferent to science, how can we thrive as a society and continue to innovate? To secure a better future we need to be vigilant about helping people understand all the incredible opportunities and innovations science has brought us, as well as the dedication, rigor and investment it takes to achieve those results.”

Recognizing the need to champion science, 3M has appointed Dr. Jayshree Seth as the first-ever 3M chief science advocate. Dr. Seth will be an ambassador that fosters and contributes to dialogues on the image of science and the importance it plays in improving lives around the world.

An accomplished scientist with a PhD in chemical engineering and 60 patents to her name, Dr. Seth has earned the distinguished title of corporate scientist – the highest position within the technical community at 3M. In addition to her accomplishments in scientific innovation, Dr. Seth is passionate about mentoring young scientists as well as other 3M employees.

“As a student, at times I struggled with science subjects myself. I was lucky to have inspirational teachers and an encouraging family that truly believed in the benefits of science,” said Dr. Seth. “In my role as chief science advocate, I’ll raise awareness and break down barriers to the appreciation and excitement of science. I want people to know you don’t need to be a genius to be a scientist. I want people to understand how science improves lives and drives the innovations we rely on every minute of every day. And, ultimately, I want to be a part of the solution that creates a new generation of science advocates. This is particularly important because by 2050 the world population is anticipated to grow from 7 billion to 9 billion, and the economy is expected to quadruple.1 We need science to solve the problems and seize the opportunities that come from that growth, such as increased energy use, water scarcity, transportation congestion and air pollution.”

The appointment of Dr. Seth to the role of chief science advocate builds on 3M’s 40-year commitment to foster the next generation of scientists and improve lives. Across the United States and internationally, 3M provides substantial resources to support STEM initiatives.

In the United States, 3M’s 10-year commitment to the Discovery Education 3M Young Scientist Challenge, a premier science competition for middle school students, has connected aspiring young scientists with 3M mentors. Globally, 3Mgives, the company’s philanthropic arm, has supported dozens of local markets through programs such as a partnership with “Let’s Talk Science” in Canada for over 10 years, a Mobile Science Lab Initiative in India, a five-year Science Challenge including teacher training and a student competition in Brazil, as well as support of First Robotics teams and WorldSkills competitions around the world.

In 2018, 3Mgives will be making a significant investment in international STEM initiatives. For example, the company will participate in a new STEMania program in Saudi Arabia to promote gender equity and encourage young females in elementary and intermediate grades to pursue STEM careers.

Ipsos conducted the study of 14,036 adults across 14 countries between June 14, 2017 and August 26, 2017. The survey was fielded through a combination of online and offline interviews. Approximately 1,000 people aged 18+ were surveyed in each country. Countries included in the study: Brazil, Canada, China, France, Germany, India, Japan, Mexico, Poland, Kingdom of Saudi Arabia, Singapore, South Africa, United Kingdom and the United States. The sample for each country was nationally representative based on age, gender, region, and race/ethnicity (where applicable). At the 95 percent confidence level, the margin of error for the 14-country global total is +/- 0.83 percentage points. Emerging and developed countries were grouped in the following way:

At 3M, we apply science in collaborative ways to improve lives daily. With $32 billion in sales, our 91,000 employees connect with customers all around the world. Learn more about 3M’s creative solutions to the world’s problems at www.3M.com or on Twitter @3M or @3MNews. 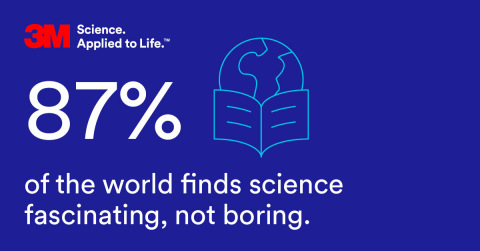