ABU DHABI, United Arabic Emirates--(BUSINESS WIRE)--The UAE Jiu-Jitsu Federation (UAEJJF) announced that the 10th edition of the Abu Dhabi World Professional Jiu-Jitsu Championship, the largest event on the Jiu-Jitsu world calendar, will take place on April 16th. The announcement came through an expanded press conference organized by UAEJJF at the Ritz-Carlton Abu Dhabi, where it highlighted the schedule of events for 2018.

As the Championship's organizer, UAEJJF announced that this season's edition will be unique as it celebrates 10 years of excellence at both local and international levels. The Federation also announced unprecedented participation of local, regional and international players. Over the course of 13 days, the Championship will be bringing together the most famous names in Jiu-Jitsu at the Mubadala Arena in Abu Dhabi.

During the conference, UAEJJF officials revealed that the total value of cash prizes is estimated at more than USD 1.87 million, part of which will be distributed amongst the winners as follows:

The Federation has also added to the Championship new prizes for the top three winners in the Youth and Masters categories.

All photos, videos and additional content can be downloaded here 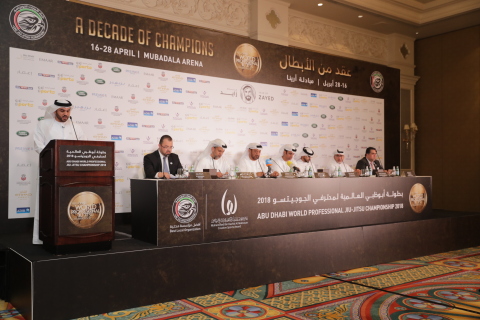