TOKYO--(BUSINESS WIRE)--Five major cities in the Asia-Pacific region—Tokyo, Singapore, Seoul, Hong Kong and Sydney—were ranked in the top 10 of the 2017 Global Power City Index (GPCI) report published today by The Mori Memorial Foundation’s Institute for Urban Strategies, a research institute established by Mori Building, a leading urban developer in Tokyo. First published in 2008, the annual GPCI report evaluates and ranks 44 major cities according to their “magnetism,” or their overall power to attract creative individuals and enterprises from around the world. Cities are rated on the basis of six categories: Economy, R&D, Cultural Interaction, Livability, Environment, and Accessibility.Tokyo, which overtook Paris and claimed the No. 3 slot for the first time last year, further improved its scores in the fields of “Cultural Interaction” and “Accessibility”, closing the gap on second-placed New York. Singapore was rated as a city with one of the best overall balance of qualities in Asia, being ranked within the top 10 in all categories except “Livability”. Most notably, the city was ranked #3 in the “Environment” field due largely to its abundance of nature and superior air quality. Seoul ranked 6thoverall for the sixth year running, with a strong performance in the “R&D” field due to the high number of patents filed there and its large pool of researchers. While Hong Kong fell from 7th to 9th in the overall rankings, the city continued to score highly in the category of “Accessibility”, and Sydney achieved a top 10 overall ranking for the first time in seven years with a strong boost in its “Livability” ratings.

Two major Chinese cities, Beijing and Shanghai, continued to perform strongly against “Economy” criteria, achieving respective rankings of 3rd and 5th as a result of their population size and GDP levels, and in terms of the number of the world’s top 500 companies with operations there. Shanghai also ranked 3rd in the category of “Accessibility”, due to the high number of passengers arriving or departing on domestic and international flights serving the city. Other Asian cities featuring in the rankings included Osaka (rated #26), Kuala Lumpur (#31), Bangkok (#33), Taipei (#36), Fukuoka (#37), Jakarta (#41), and Mumbai (#42).

“Singapore is a model for other emerging Asian cities,” commented Hiroo Ichikawa, Executive Director of The Mori Memorial Foundation. “Reflecting their recent economic growth, most Asian cities perform strongly in the categories of Economy and Accessibility, but they need to improve their ‘soft’ attractions to become truly magnetic cities,” he added.

Commented Shingo Tsuji, Director of The Mori Memorial Foundation and CEO of Mori Building, “Global players today are seeking cities not just with a strong business environment, but those additionally offering improved lifestyles: high quality residences, diverse cultural and retail facilities, a stress-free transportation network and a rich natural environment. For global cities to thrive, they need to maximize their strengths while overcoming weaknesses; this will help them to bolster their overall magnetic power and attract talent and investment from around the world.”

The Mori Memorial Foundation’s Institute for Urban Strategies has published its GPCI report since 2007 to analyze the strengths and weaknesses of global cities amid intensifying competition. For more details, see www.mori-m-foundation.or.jp/english/aboutus2/index.shtml#about_strategies 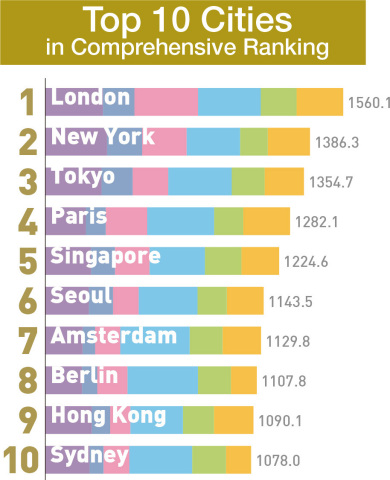