Shanghai--(Business Wire)—Henkel is offering a unique, fully automatic impregnation solution to repair casting parts with various porous defects such as air holes, needle holes and shrinkages, so as to save cost for customers. Impregnation is a technology to address micropore-caused leakage in casting parts by filling thin fluid to the micropores under normal or elevated pressure, which will solidify and polymerize in order to seal up the pores.

Henkel Loctite impregnants are two types of methacrylate resins: heat curable and oxygen-weary. Resinol 90R，Resinol 90C，Resinol 88 are all heat curable, among which 90R is Henkel’s new recyclable resin. Resinol RTC and Fleseal 5100 are oxygen-weary products with the latter being specially developed to seal up pores on electron components. 90R, due to its lower density than water, can therefore be separated from the washing water. With the 90R impregnation process, 85-90% of the resin washed away by water can consequently be recycled, greatly saving the impregnant that is otherwise to be wasted. Meanwhile, compared to the impregnation process of non-recyclable heat curable resin, the water consumption of 90R can be reduced by 40%, thus saving cost for sewage treatment. Currently all Henkel Loctite Impregnation Service Centers use the recyclable resin 90R in their casting impregnation services.

The impregnation technology only seals pores and exempts big holes because the resin can flow away from the big holes, particularly during the solidifying process. Therefore, the size of the pores of the components is critical in determining the sealing effect. For a specific process and impregnant, the longer the pore is and the smaller the pore diameter is, the longer it takes to fill the pore. Theoretically, Henkel impregnation resin and process can seal a pore with a maximum diameter of 0.25mm.

If the resin residue in the components’ screw-threads or other blind holes is not rinsed completely, it will be hardly possible to be removed after solidification, thus hampering follow-up casting or processing. The components’ placement, the rinsing method and time, the quality of the washing water and the centrifugal force all affect the final cleansing effect. Placing the concave surface and blind holes downward or outward can help spin out the liquid during the centrifugal process. In addition, replacing the water in the washing tank and solidifying tank regularly, increasing the rinsing time and frequency and increasing the centrifugal time and rotate speed also help enhance the cleansing effect. Henkel Loctite Impregnation process has designed a centrifugal procedure following the process in each tank to spin out the impregnant residue and water. The water in the rinsing tank is also monitored with regular water replacement and tank wall cleaning. The resin separation test is performed each week to inspect the content of water and resin in the washing tank. If the volume of the resin layer on the water larger than is 12% of the water, the resin-removal process should be conducted to improve the washing effect.

During the impregnation process, the casting components are prone to oxidization and erosion when rinsed in water or solidifying under high temperature, antioxidants and preservatives must be added to the washing tank and the solidifying tank to avoid staining caused by oxidation and erosion. 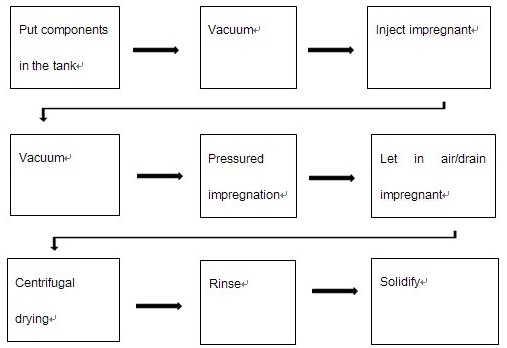 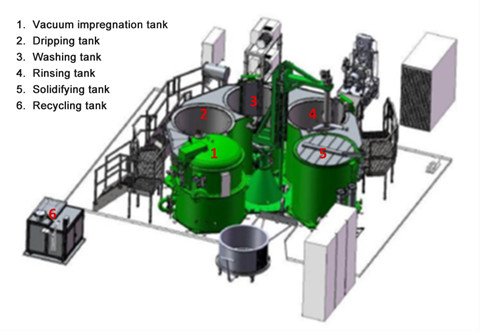