MIAOLI CITY, Taiwan--(BUSINESS WIRE)--Michael Flatley and his troupe took Taiwan by storm as his smash-hit show, Feet of Flames (http://www.michaelflatley.com.com) left 30,000+ screaming fans in Miaoli Stadium still on their feet and clamoring for more following 5 incredible standing ovations. The dance king so impressed the Mayor of Miaoli that in honour of the occasion he presented a spectacular 15 minute fireworks display after the show.

With demand exceeding all expectations, Flatley and his troupe extended the tour to include a grueling schedule of 8 shows in 6 days to accommodate phenomenal ticket sales.

Looking fitter than ever, this is his first return to the stage in over 3 years. Proud father Michael is also delighted to have his son, Michael St. James, in the audience for the first time.

Several months ago, Michael began intensive training for the Feet of Flames tour of Taiwan. This show originally debuted at the historic Route of Kings in Hyde Park in 1998.

The show features Michael’s electrifying a cappella solo which brought Taiwanese audiences to their feet.

Backed by a 100 strong cast, Flatley’s return is rumored to be a $20 MILLION DOLLAR PAYDAY. 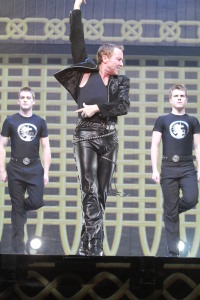