36,000 oak trees have been planted near Ingolstadt to kick-off a unique research initiative: Together with the Bavarian State Forestry and the Chair of Forest Yield Science at the Technical University of Munich, Audi has launched the "Oak Forest CO2 Reservoir" research project. Trial sites near Györ, Hungary, and other Audi locations worldwide are to follow the pilot site in the Kösching Forest near Ingolstadt. Frank Dreves, Member of the Board of Management for Production at AUDI AG, and Helmut Brunner, the Bavarian State Minister of Nutrition, Agriculture, and Forestry, presented the project today at the Kösching research site. "At Audi, environmental protection does not stop at the factory gate. Projects like this further reinforce our commitment to sustainability and environmental protection," said Dreves.

Oaks are special trees, and not only in mythology. They are a valuable biotope for countless animal and plant species. They also store large amounts of carbon. Under the direction of the Technical University of Munich, the science project in the Kösching Forest will investigate the "oak ecosystem" to identify the interrelationships between the living conditions of the tree, its potential to bind CO2, and the biodiversity it enables. The participating scientists hope to gain important insights into the future of our forests, climate protection, and biodiversity.

The research site in the Kösching Forest is the starting point for the international expansion of the project to sites with different climatic conditions. A second trial site covering four hectares at the Audi production site in Györ, Hungary, is currently being planted with more than 13,000 Pedunculate Oaks. This trial site will also be managed by the Technical University of Munich as a cooperative project with the University of Sopron. Plans are already underway for additional sites at international Audi locations.

The roughly six hectare area of the international pilot site in the Kösching Forest was almost completely destroyed in 2007 by bark beetles, drought and Hurricane Kyrill, and replanted with approximately 36,000 young Pedunculate Oaks in 2008 as part of the research project. A portion of the acreage was planted in a special pattern so that a large number of different growth conditions and growth patterns can be studied within a small area.

Environmental protection at Audi - the strategy

The continuous improvement of the environmental compatibility of the products and production sites is firmly anchored in the Audi environmental policy, as is the ecological use of natural resources. Audi follows a systematic strategy to reduce consumption and emissions. Audi will further reduce the CO2 value of its models by around 20 percent by the year 2012. The strategy also calls for the continuous reduction of site-specific and company-specific CO2 emissions. This means efficiency, low fuel consumption, long service life and the use of environment-friendly materials in the products as well as the sustainable and ecological use of resources in production.

Energy-efficient products and resource-friendly production have top priority in Audi's holistic strategy for environmental protection. A series of innovative technologies and the systematic use of the modular efficiency platform have propelled Audi to a leading position in its premium field of competitors. The new Audi A3 1.6 TDI, for example, is expected to set a new record in terms of CO2 emissions next year: It will crack the 100 gram per kilometer mark (160.93 g/mile), with CO2 emissions of only 99 g/km (159.33 g/mile), corresponding to a fuel consumption of only 3.8 liters of diesel fuel per 100 kilometers (61.9 US mpg).

Audi employs a full range of advanced technologies to further reduce CO2 emissions in production. Examples include trigeneration (power, heat, and cooling) with excellent efficiency, the use of waste heat, and heat recovery. Audi also makes space available at the Ingolstadt and Neckarsulm sites for the installation of innovative photovoltaic arrays. In addition, efficient fabrication methods and optimal logistics in all areas of production ensure the efficient use of resources.

AUDI AG sold a total of 1,003,469 cars in 2008 and thus achieved its 13th consecutive record year. The Company posted new record figures with revenue of €34.2 billion and profit before tax of €3.2 billion. Audi produces vehicles in Ingolstadt and Neckarsulm (Germany), Györ (Hungary), Changchun (China) and Brussels (Belgium). Aurangabad in India saw the start of CKD production of the Audi A6 at the end of 2007 and of the Audi A4 in early October 2008. The Company is active in more than 100 markets worldwide. AUDI AG's wholly owned subsidiaries include Automobili Lamborghini Holding S.p.A. in Sant'Agata Bolognese (Italy) and quattro GmbH in Neckarsulm. Audi currently employs around 58,000 people worldwide, including 46,500 in Germany. The brand with the four rings invests around €2 billion each year in order to sustain the Company's technological lead embodied in its "Vorsprung durch Technik" slogan. Audi plans to significantly increase the number of models in its portfolio by 2015 to 42. Audi celebrates its 100th birthday this year. The Company was founded by August Horch in Zwickau on July 16, 1909; he named it AUDI after the Latin translation of his surname ("hark!"). 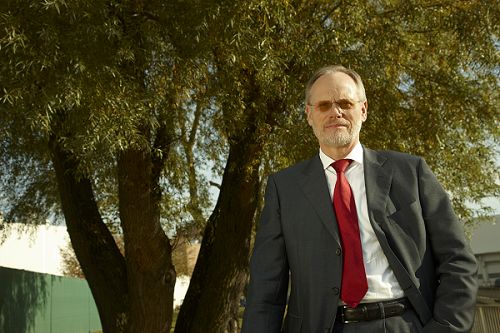 36,000 oak trees have been planted near Ingolstadt to kick-off a unique research initiative: Together with the Bavarian State Forestry and the Chair of Forest Yield Science at the Technical University of Munich, Audi has launched the "Oak Forest CO2 Reservoir" research project. Trial sites near Gyor, Hungary, and other Audi locations worldwide are to follow the pilot site in the Kosching Forest near Ingolstadt. Frank Dreves (in the picture), Member of the Board of Management for Production at AUDI AG, and Helmut Brunner, the Bavarian State Minister of Nutrition, Agriculture, and Forestry, presented the project today at the Kosching research site. (Photo: Business Wire)