ABU DHABI, United Arab Emirates--(BUSINESS WIRE)--A woman disguised in an abaya, which thus branded her as the ‘ghost’, attempted to rob a money exchange center in Abu Dhabi after threatening employees with what turned out to be a fake gun. The suspect additionally had a knife in her possession, and intended to use it in the event that her threats with the false gun were unsuccessful.

The Abu Dhabi Police announced that they had received notification last Thursday regarding the attempted robbery and immediately dispatched a team to the location. The police, quickly reaching the location, prevented the suspect from fleeing and swiftly apprehended her. The suspect was then frisked by female police officers who confiscated the items in her possession. An altercation between the suspect and the employees of the exchange center had occurred before the police arrived, however there were no reported injuries.

Colonel Dr. Rashid Mohammad Borshid, Head of the Criminal Investigation Department (CID) at Abu Dhabi Police, said: “The woman, identified as A. L. R., 33 years, is a Filipino national and an illegal resident in the UAE. Wearing black gloves and a black full-face veil with a white scarf on her head, she threatened the employees at gun point and demanded money. She also held a black cloth in her hand, of which she used in an effort to conceal the fake gun and to avoid being recognized or caught on CCTV.”

Later, the woman confessed to planning the robbery to settle her outstanding debt, of approximately AED 140,000.

Colonel Dr. Borshid expressed his dismay at the use of the traditional dress by the suspect to commit her crime, as the UAE is known for being a safe haven for all religions and nationalities, and as one of the most secure countries in the world. 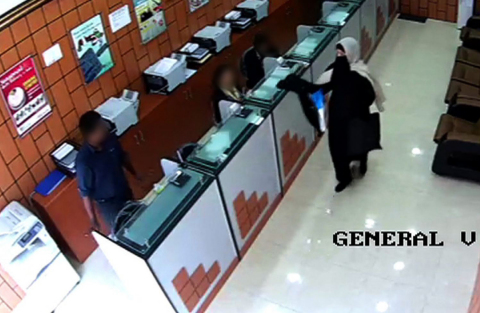