NEWARK, N.J.--(BUSINESS WIRE)--On October 15, 2014, Panasonic Corporation announced that Immanuel-Kant-School Bremerhaven of Germany won the Grand Prize for its video "Stumbling" in the Panasonic Kid Witness News (KWN) Global Contest 2014. Students from Immanuel-Kant-School Bremerhaven were honored at the award ceremony held at Panasonic Corporation of North America headquarters in Newark, New Jersey. Students from other finalist schools also attended the ceremony, where they were recognized with category awards, including "Best Concept."

The seven finalist videos focused on topics ranging from global environmental issues to strong friendships. The Grand Prize-winning video dealt with a serious theme: the fate of Holocaust victims during World War II. In the video, the students brilliantly expressed their feelings on this theme and delivered a message that we must all learn from the past.

KWN is a hands-on video education program that Panasonic operates as part of its efforts to support education. The company provides video cameras and other production equipment to elementary and middle schools participating in the program. Currently, some 10,000 children and teachers around the world are taking part in the program. Since the program began in the United States in 1989, more than 170,000 children have participated.

To commemorate the 25th anniversary of the KWN Program, the global awards ceremony was held in the U.S., where it originated. In his remarks opening the awards ceremony, Panasonic Corporation of North America Chairman & CEO Joseph M. Taylor pointed to the far-reaching impact of Kid Witness News. "When the program began 25 years ago, I don't think anyone could have imagined that it would grow to touch the lives of so many children in so many countries around the world," Mr. Taylor said. "I'm very proud to honor the students who created such outstanding video stories. I have no doubt that, with their creativity, positive attitude and communications skills, they will become the leaders of tomorrow."

The KWN program honors the video works created by children every year. To produce videos, students choose a theme on their own and then handle all aspects of video-making, from planning and scripting to filming and editing. This year's KWN Global Contest saw 548 schools from 23 countries and regions take part in the competition by submitting five-minute videos themed about either ecology or communication. 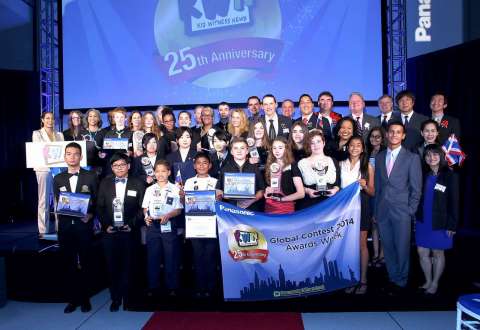