Team up with Siemens and Sony, Aleees Commits to Construct the No.1 E-Bus

TAIPEI--(BUSINESS WIRE)--Ever since the policies of electric vehicle promotion are established all over the highly developed countries, battery technologies had become the key to solve the stability issue of the electric vehicles. After the alliance of Tesla and Panasonic, Aleees(F-5227), the biggest electric bus manufacturer in Taiwan, has entered into an agreement to team up with Sony, the Japanese tycoon of advanced battery technology. The cooperation between Aleees and Sony started from the 1st of September 2014 is regarded as a lift-up toward electric vehicle industry to speed up the development of automotive Lithium Batteries. Further more, over 4 years, with 1 million miles of practical operation of Aleees-Siemens E-bus, Aleees now is aiming to construct the No.1 E-bus with the technical supports from Siemens and Sony.

Aleees also just began with their establishment ceremony the next day after the 1st September at Yuyao City of the province of Zhejiang in China, officially entered into the market of electric bus in Mainland China, to seek for the multi-billion US dollar businesses in electric vehicles and energy storage systems. By joining alliances with companies from every field, connecting with the upstream and downstream partners, Aleees will foresee a huge expansion in all-electric powered bus market toward every city of the world.

Whereas Aleees’ unique battery swapping mode and urban-public-transport based marketing strategies, combined with the idea of Private-Public-Partnership, Aleees is reckoned as the way most possible to succeed in the upcoming future. The historically new big-three in electric vehicle industry formed by Siemens, Sony and Aleees will overwhelmingly indicate a realistic solution to slow down global warming, air pollution, and to solve energy crisis. By the predictable breakthrough of battery technologies in the near future, the green energy era is expected to come after all the efforts that Aleees and its alliances have made.

Aleees Group as a Taiwan top-notch electric bus and LFP cathode material manufacturer was founded in 2005 by the main shareholders of Ruentex Group., KPCB Fund, QVT Financial LP. The concept of “Human Safe and Eco Friendly” Aleees Group upheld is to build a cradle to cradle green economical system for posterity and for a sustainable environment. 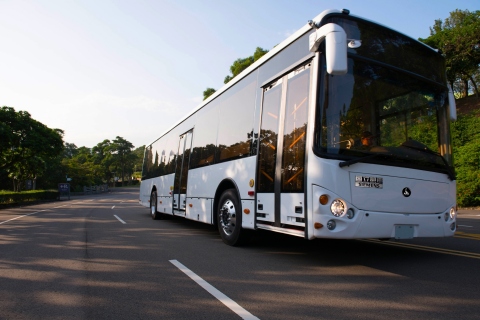