NetJets Soaring to New Heights on Its 50th Anniversary

NetJets’ golden anniversary marks a major milestone in the company’s history, which includes innovations such as pioneering the business jet industry and creating the fractional ownership concept for aircraft

COLUMBUS, Ohio--(BUSINESS WIRE)--NetJets® Inc., a Berkshire Hathaway company and the worldwide leader in private aviation, will celebrate its 50th anniversary on May 21 with employees at an event at its headquarters in Columbus, Ohio. NetJets was incorporated as Executive Jet Airways, Inc. on May 21, 1964.

NetJets is the largest company in private aviation with more than 700 aircraft in its fleet worldwide, approximately 6,000 employees around the world and operations in the U.S., Europe and China. The company’s focus on safety and service over 50 years makes it a leader in the private aviation industry.

“NetJets is the iconic brand in private aviation and is responsible for many firsts in private aviation,” said NetJets Chairman and CEO Jordan B. Hansell. “Very few companies in any industry reach the golden anniversary milestone, and through the years NetJets has flourished since it was incorporated in 1964 as a result of the hard work, dedication and commitment of its employees worldwide. We are very proud of our past, but we are focused on our future as we commemorate this special occasion.”

EJA was acquired by Richard Santulli in 1984, and he innovated and launched the fractional aircraft business in 1986. Berkshire Hathaway purchased the company in 1998 and changed the name to NetJets in 2002. David Sokol became chairman and CEO in 2009, and was followed by current Chairman and CEO Jordan B. Hansell.

“I purchased a small, used aircraft in 1986 that I named Indefensible because I felt guilty about flying privately,” said Berkshire Hathaway Chairman and CEO Warren Buffett. “I quickly realized the value of having a private jet as a business tool for utility and convenience, and a few years later Berkshire purchased a larger jet that I named Indispensable. I joined the NetJets family shortly thereafter, purchased the company in 1998, and continue to see it as a remarkable company with a fascinating history and an even better future.”

“NetJets flew just under 306,000 flights in 2013 to more than 2,500 airports around the world. A NetJets aircraft took off every 103 seconds last year with more than 190 million statute miles flown – the equivalent of traveling to the moon and back 400 times,” added Hansell.

NetJets Inc., a Berkshire Hathaway company, is the worldwide leader in private aviation with the largest and most diverse private jet fleet in the world. With a half century of safety and innovation in private travel, NetJets began in 1964 as the first aircraft charter; and management company in the world. In 1986, NetJets pioneered the concept of fractional aircraft ownership – offering individuals and businesses all of the benefits of whole aircraft ownership and more, at a fraction of the cost. Today, NetJets offers a full range of private aviation solutions through its businesses in North America and Europe, as well as in China - once regulatory approvals are finalized. Products include NetJets Shares™, NetJets Leases™ and the Marquis Jet Card®, which provides access to NetJets through a 25-hour jet card. 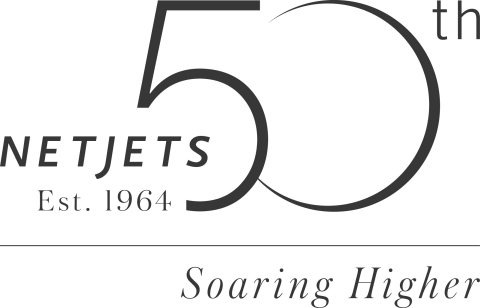