Endemol a world leader in entertainment programming and the makers of hit TV shows such as Big Brother, Deal or No Deal and Fear Factor is rolling out its strategy for growth in Asia.  Mr Arjen W. M. van Mierlo, CEO Asian Operations is based in Hong Kong. 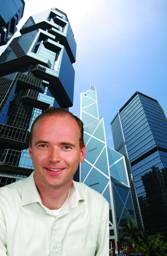 Endemol Group has had a significant impact on popular worldwide culture in its 15 year history.  Its pioneering global format Big Brother, which is being aired in 67 countries, is the original reality TV show, an entertainment hit and consistent ratings winner.  Big Brother also remains the most successful 360 degree programme ever created generating billions of webpage views and over 300 million online video views each year.

There were a number of strategic reasons why Endemol Group chose Hong Kong for its regional headquarters.  "Hong Kong is one of the key media hubs in Asia.  Hong Kong's central location in the region and excellent transport infrastructure mean all Asia's key cities are within 3-5 hours flight time.  Mainland China is an important market for Endemol's growth strategy and Hong Kong is the obvious gateway to China due to its proximity, its shared culture, political and legal structure.  Hong Kong is also an international city, the language of business is English, Hong Kong also offers an ideal workplace for overseas businesses, and it has great lifestyle" explains CEO Asian Operations, Endemol Asia Limited, Mr Arjen W. M. van Mierlo.

The Asian regional headquarters office will be responsible for all activities for the Endemol Group in Asia.  "Endemol has already established a significant presence in India and South East Asia and now with our regional headquarters in Hong Kong we hope to develop new business across the rest of Asia, including China, Korea and Japan," says Mr Mierlo.  To support this strategy Endemol is also looking to set-up further satellite offices, including Beijing and Shanghai, which will be managed out of Hong Kong.

Mr Simon Galpin, Director General of Investment-Promotion at Invest Hong Kong is pleased Endemol Group chose to base its regional Asian headquarters in Hong Kong.  He said "Hong Kong is truly Asia's regional business capital with over 3,500 overseas companies basing their regional operations in our city."

"Despite the global economic downturn increasing numbers of businesses are investing in Hong Kong because of the city's enduring business advantages including its common law legal system underpinned by an independent judiciary, low taxes, free flow of information, capital and labour and world-class infrastructure.  I'm very pleased that Endemol Group has chosen to manage its regional expansion strategy from the heart of Asia - Hong Kong.  I would like to wish Endemol's new Asian enterprise every success and Invest Hong Kong stands ready to provide any further help Endemol needs," he added.

Invest Hong Kong partners with clients on a long term basis and is available to help at any stage of a client's business development strategy.  "Invest Hong Kong has been supporting us from start to finish; during our decision making process, the successful set up of our Asian headquarters and they have assured us they will continue to provide support as we build the new business," says Mr Mierlo.

Mr Mierlo concludes on a personal note "Hong Kong is a great international city, everything is very accessible and it is very easy to adapt to the lifestyle.  I would recommend to come and live and work in Hong Kong to anyone."

Founded in 1994, Endemol is a global leader in entertainment programming, having established itself as the largest independent TV, cross platform and digital production company in the world.  The company produces worldwide hits like Big Brother, Deal or No Deal, Extreme Makeover: Home Edition, Star Academy and Wipeout.

Endemol comprises a global network of 80 companies in 26 countries including the USA, the UK, Spain, Italy, France, Germany and the Netherlands, as well as Latin America, India, South Africa and Australia.

The company annually produces nearly 40,000 hours of original content across 400 broadcasters and cross media platforms and this is seen by over one billion viewers every day.  Recent digital successes include generating over 300 million online video views in 2008 -for Big Brother alone.  Endemol is also behind numerous award winning original digital productions among many other growing online accomplishments.

The company's creative teams around the world are continuously developing new entertainment properties that are shared across the Endemol network.  Endemol currently has a growing library of over 2,000 formats and nearly 20,000 hours of content across genres including entertainment, reality TV, game shows, animation, comedy and drama.

Endemol also recently acquired 100% of Southern Star Group, the largest production company in Australia and one of the largest distributors of English language television programming in the world.

Invest Hong Kong is the department of the Hong Kong Special Administrative Region (HKSAR) Government responsible for Foreign Direct Investment, supporting overseas, Mainland and Taiwanese businesses to set up and expand in Hong Kong. We provide free advice and customised services to help your business succeed in our vibrant economy. For more information, please visit www.investhk.gov.hk.