ATLANTA--(BUSINESS WIRE)--In a tour spanning more than 92,000 miles, Coca-Cola and FIFA will take the iconic FIFA World Cup™ Trophy on its longest journey to date. Announced today, the route for the highly anticipated 2014 FIFA World Cup™ Trophy Tour will give more than one million people around the world the chance to experience football's most coveted prize in their own communities.

The FIFA World Cup Trophy Tour™ by Coca-Cola will be the most inclusive, participatory event ever, inviting fans around the world to get up close and personal with the same trophy that is presented by FIFA to the country winning the FIFA World Cup™.

The journey will include the first ever pan-Latin America tour, with events in 39 countries across the region that is home to the host nation, Brazil. The tour will also be visiting 50 new countries that have never had the opportunity to host the trophy before.

“Coca-Cola shares the passion that fans have for football around the world and through our partnership with FIFA we champion the power of football to bring the world together,” said Joseph Tripodi, Executive Vice President and Chief Marketing and Commercial Officer, The Coca-Cola Company.

“We are extremely happy to bring the most iconic symbol in football to the world once again. As many countries start securing their spots in the 2014 FIFA World Cup™, this tour gives us the opportunity to share our passion for the beautiful game with fans across the globe, who are given a once-in-a-lifetime opportunity to see the trophy up close in their home country. I want to thank our long-term partner Coca-Cola for making this dream come true for many millions of football fans around the globe,” explained FIFA President, Joseph S. Blatter.

For the latest from the FIFA World Cup™ Trophy Tour including upcoming tour destinations and dates, exclusive interviews, photos and videos, visit the official website www.fifa.com/trophytour, the official Facebook page www.facebook.com/trophytour, and twitter at www.twitter.com/trophytour/ @trophytour where our official photo blogger will live tweet directly from the event.

The Trophy Tour forms part of Coca-Cola’s 2014 FIFA World Cup™ campaign which invites fans to celebrate the ‘The World’s Cup’, a platform which will see Coca-Cola promote the most inclusive and participatory FIFA World Cup™ ever.

Among the other key elements from the Coca-Cola ‘The World’s Cup’ campaign are a Brazilian inspired visual identity, global television commercials, digital consumer engagement and legacy programs.

As part of the inclusive nature of ‘The World’s Cup,’ Coca-Cola has partnered with Backplane to foster a community of the most avid football fans across the globe. This community, www.coca-colafansunited.com, will be a constant source of behind-the-scenes content, and will provide fans a home to discuss and debate with equally passionate fans throughout the world’s largest sporting event.

In addition, Coca-Cola will release its official anthem for the 2014 FIFA World Cup™ World’s Cup campaign - The World is Ours – featuring vocals from David Correy and sounds from Monobloco, a Brazilian street band. The anthem brings the music of Brazil to the world and captures the rhythms of samba, baile funk and technobraga. The song can be heard on Spotify or by visiting www.cokeurl.com/worldisours.

The Coca-Cola Company has had a long-standing relationship with FIFA since 1974 and has been an official sponsor of the FIFA World Cup™ since 1978. Coca-Cola has had stadium advertising at every FIFA World Cup™ since 1950 and is a long-time supporter of football at all levels. This is the third time that Coca-Cola and FIFA have come together to bring the Trophy Tour to the world, starting in 2006 and then again in 2010.

The Coca-Cola Company (NYSE: KO) is the world's largest beverage company, refreshing consumers with more than 500 sparkling and still brands. Led by Coca-Cola, the world's most valuable brand, our Company's portfolio features 16 billion-dollar brands including Diet Coke, Fanta, Sprite, Coca-Cola Zero, vitaminwater, Powerade, Minute Maid, Simply, Georgia and Del Valle. Globally, we are the No. 1 provider of sparkling beverages, ready-to-drink coffees, and juices and juice drinks. Through the world's largest beverage distribution system, consumers in more than 200 countries enjoy our beverages at a rate of more than 1.8 billion servings a day. With an enduring commitment to building sustainable communities, our Company is focused on initiatives that reduce our environmental footprint, support active, healthy living, create a safe, inclusive work environment for our associates, and enhance the economic development of the communities where we operate. Together with our bottling partners, we rank among the world's top 10 private employers with more than 700,000 system associates. For more information, visit Coca-Cola Journey at www.coca-colacompany.com, follow us on Twitter at twitter.com/CocaColaCo or check out our blog, Coca-Cola Unbottled, at www.coca-colablog.com.

Backplane, a Palo Alto-based technology company and developer of the first community platform, creates authentic communities and empowers users to engage directly with influencers, brands and others who share the same passions.

In a tour spanning more than 92,000 miles, Coca-Cola and FIFA will take the iconic FIFA World Cup(TM) Trophy on its longest journey to date. (Graphic: Business Wire) 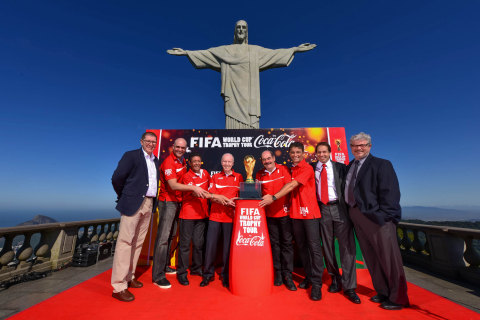