The award organizer, the Arab Family Organization, in cooperation with the Arab League and the Economic and Social Commission for Western Asia (ESCWA), extended this award to HH Sheikh Saif for its inaugural year. The award is themed: “Through Family Bonds We Rise and Elevate Ourselves.” The selection of HH Sheikh Saif for this award was supported by several institutions, entities and ministries in addition to departments concerned with family affairs in the UAE and other Arab countries.

In a ceremony held at the Sharjah Chamber of Commerce & Industry, HH Sheikh Dr. Al Qasimi valued the efforts of HH Sheikh Saif in social and humanitarian fields.

Commenting on the award, HH Sheikh Saif said that the gratitude for this award goes to the father of the Emirati family, His Highness Sheikh Khalifa bin Zayed Al Nahyan, President of the UAE and Ruler of Abu Dhabi.

He also thanked HH Sheikh Dr. Al Qasimi noting his generosity in different humanitarian fields. HH Sheikh Saif further commented: “The Late HH Sheikh Zayed Al Nahyan, Founder of the UAE, has called upon us to extend care to the Emirati family; this unit is the first line of defense that safeguards our society. The Emirati family has been able to face challenges posed by globalization whilst retaining the positive values and traditions that are deeply engrained in our Arab and Islamic civilization.”

The award aims to attract ideas and projects promoting the Arab family’s security and link all entities and institutions concerned with family affairs in order to exchange ideas and discuss challenges that Arab families face.

Huda bint Yusuf, Arab Family Organization Secretary General, said: “The significance of HH Sheikh Saif bin Zayed Al Nahyan being chosen is not only due to his distinguished Arab lineage, but also due to his achievements in the Emirati society.”

In a gesture by the event organizer, HH Sheikh Saif bin Zayed Al Nahyan was surprised to see his three children (Zayed, Khalifa and Moza) on the stage with him; they came to present him with roses and congratulate him.

The press release can be viewed online: http://www.me-newswire.net/ar/news/7456/ar 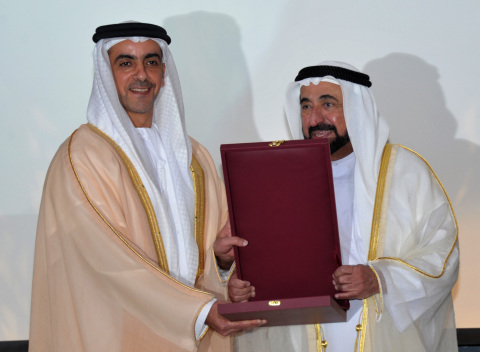