SHANGHAI--(BUSINESS WIRE)--Recently, China Central Television (CCTV) broadcast a report alleging health risks from asphalt-based “damping” materials used in automobiles. According to the report, the asphalt materials, which contain known carcinogens, were found to be emitting dangerous fumes. These fumes can be released into the car from the damping materials at high temperatures.

The complicating factor is that the asphalt-based materials can be manufactured from a variety of source compounds and can vary in their composition. Often, producers will utilize the source compounds that are the cheapest and most readily available, potentially flirting with safety standards. This causes difficulty for both companies and consumers to be certain about which compounds are contained in and emitted from the particular materials found in their cars.

Terophon 8275 is an innovation from Henkel that has already been in use at leading European car manufacturers since December of 2012. The new product, a liquid-applied sound deadener (LASD), significantly – and safely – reduces the solid-borne noise and vibrations generated by the engine and the wheels during driving. The material is rubber-based, consisting of natural/renewable raw materials and technology that limit emissions to levels far below the current safety standards. Moreover, Terophon 8275 also eliminates the uncertainty of dangerous source materials and varying levels of quality found in asphalt dampeners. The source compounds remain the same, always.

In addition to the health safety advantages, Terophon 8275 outperforms the competition by being up to 20% lighter and testing 15% higher in acoustic performance. This saves about 1 kilo in the vehicle design, which directly leads to improved fuel economy and a more comfortable driving experience. The health safety and performance advantages are not limited to just the driver's experience as the end-user, but also apply to the entire product cycle – in source materials, manufacturing, logistics, storage, application and disposal (reuse).

Easy and Efficient Application and Changeover

The Terophon 8275 offers an easy and efficient application process that can be either robotic for large operations, or manual for smaller to medium-sized companies. In both methods, the 200-liter Terophon storage drums are compatible with standard dispensing equipment commonly used in automotive assembly, making Terophon 8275 easy to integrate into most existing setups. For new customers, Henkel offers training, testing and technical assistance to ensure a seamless transition from asphalt. Nearly all the asphalt mats used today can be replaced by Terophon 8275, and the product does not require any hazard labeling.

Photos are available at http://www.henkel.com/press. 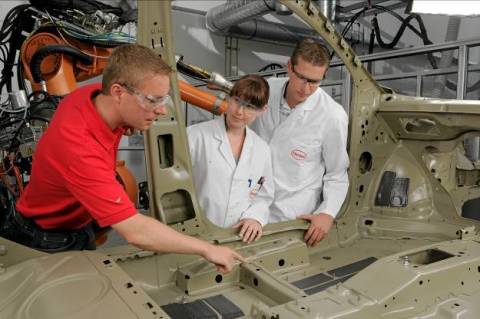