Henkel Once Again Named “Supplier of the Year”

SHANGHAI--(BUSINESS WIRE)--For the second time in a row, Henkel has garnered the coveted “Supplier of the Year Award” conferred by the world's largest manufacturer of beverage cans, UK company Rexam PLC. Bestowed by the Rexam Beverage Can Europe division, Henkel received the accolade for, among other reasons, new products successfully launched last year, and with projects implemented at Rexam aimed at increasing the cost efficiency of production processes.

With 60 billion beverage cans produced each year – primarily for the European and North and South American markets – Rexam PLC is not only the market leader in this segment but also one of the world’s largest manufacturers of food packaging per se. And Rexam is also the biggest customer served by Henkel’s Metal Packaging business unit. In addition to the etch degreaser Bonderite C-IC 740 E, introduced at Rexam in 2011 and successfully rolled out across the company last year, now Bonderite L-FM 290-E – the latest lubricant under this Henkel brand – is also being extensively used by this British customer. The product is completely biostable, thus rendering the storage and application of hazardous biocides in factories unnecessary. Furthermore, Henkel not only supported the beverage can producer with the commissioning of a new production facility in Finland but was also involved in various projects around Europe aligned to increasing cost efficiency and thus value creation at Rexam.

This is the tenth year in which the beverage can manufacturer has conferred its "Supplier Excellence Awards" to underline the high importance it attaches to its vendor relationships. And the “Supplier of the Year” award with which it has once again honored Henkel is the most important of these Rexam accolades. There to receive the awards from Rexam CEO Graham Chipchase at the gala ceremony in Hertfordshire near London were Henkel executives Aziz Mabrouki and Mark Sowerby.

Master of Ceremonies for the evening, Frances Tolley – who is also Rexam’s Supplier Relations Manager – made special mention of Henkel’s excellent understanding of Rexam’s business strategy, its exemplary quality standards and its outstanding performance in the provision of innovative solutions. The fact that the products from Henkel not only enhance Rexam’s competitiveness and its ability to deliver on schedule, but also and in particular serve to optimize the production processes at Rexam meant that, for the second time in succession, the beverage can producer felt it appropriate to choose Henkel as the recipient of its highest honor, that of “Supplier of the Year.”

Photo material is available at http://www.henkel.com/press 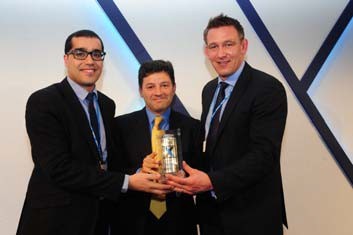