With a packed Yugongyishan and seven bands fiercely competing for the Beijing title, it was a night that saw great performances, disqualifications and even some tears.   A band was disqualified for using "prerecorded music" during their performance, despite being told during soundcheck that it was against the rules.  With judges from the music & media industry scoring, it was intense discussions all the way.

Rustic (GBOB 2009 world champions from Beijing) played a guest performance that roused the audience and showed why they had grabbed the World title last year.

In GBOB, each band performs 8 minutes of original music with styles ranging from alternative pop to metal rock.  The judges were impressed with "The Amazing Insurance Salesmen" and rated them as very talented musicians and a band with a great future.

The band will be flying to Hong Kong; courtesy of Dragonair; to represent Beijing in the China Final on 20th November and competing against the winning bands from Shanghai, Shenzhen, Macau, Guangzhou and Hong Kong.   The overall China winner will receive TWO prizes this year, the first being the free flights & accommodation to attend the World Final of GBOB in February 2010 and the second is a performance slot at Zebra Music Festival in May 2011 (with free flights & accommodation).

The World Final prize is a band development deal equivalent to US$100,000 (1 week in a top London recording studio with a producer, a 10 date United Kingdom tour and 10,000 USD in cash). 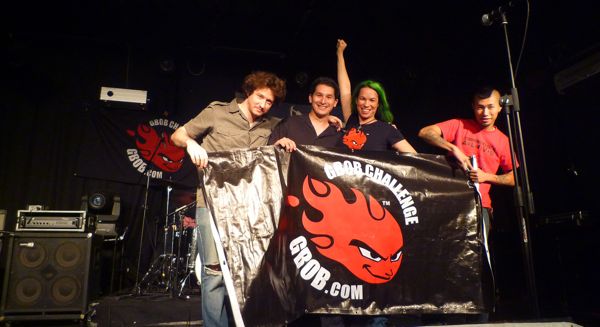