The world's exhibition EXPO 2010 is again to hear the music of Frédéric Chopin. On the occasion of the 200th anniversary of the great Polish composer's birth, the Capital City of Warsaw prepared a multimedia concert entitled "Chopin 2.0 - new paradigm", which is an innovative combination of Chopin's music, dance and singing performances with the presentation of the capital city of Poland, which is where the composer spent a half of his life. Between 19 and 21 July this year, Europe Square is going to be the venue of three evening concerts (18.30 hours of the local time). Admission to concerts is free.

"Chopin 2.0 - new paradigm" is a unique artistic programme based on interactive combination of music, singing, dance and panoramic visual projection. Due to virtual scene design, the audience is able not only to get to know Chopin's music but also elements his biography. The artistic form of visual materials shows links between Chopin and Warsaw - the city of his youth and the source of artistic inspiration where he lived a half of his life - intertwined with effective impressions presenting the Polish capital city as one abounding with creative cultural events and tourist attractions. The visitors to the Polish pavilion will be also given a Warsaw audio-guidebook in the Chinese language and a printed mini-guidebook of Warsaw retracing the footsteps of Chopin.

The programme of the concert is based on new original arrangements for three pianos, prepared especially for this event by Polish pianists - Filip Wojciechowski, Justyna Galant-Wojciechowska and Kuba Lubowicz. The performance will be also enriched with vocal and dance elements, the former of which will be performed by Iwona Loranc. All above-mentioned things together create an exquisite vocal and musical suite. An additional attraction is the fact that the concert will be played in multimedia virtual setting animated with music, which, depending on the mood and kind of arrangement, starts film motifs and effective 3D computer animations displayed onto the panoramic screen being the background of the stage.

"Chopin 2.0 - new paradigm" presents a modern approach to Chopin's music and the idea of a concert. We are glad that Warsaw is able to show Shanghai an extremely spectacular performance, combining the music of Chopin with the promotion of the city which formed the great Polish composer. We do believe that the concerts will be a great artistic and emotional experience for the audience. - says Katarzyna Ratajczyk, the head of the Office for Promotion of the Capital City of Warsaw. 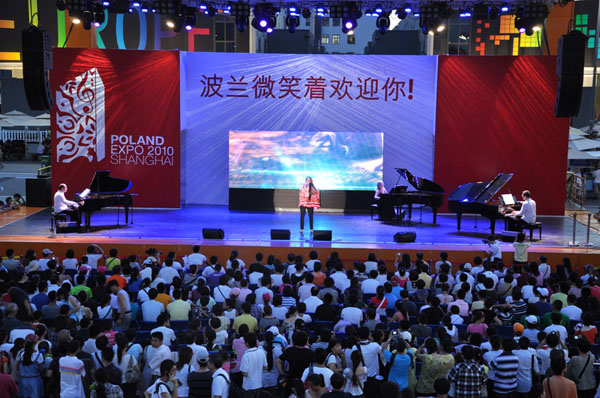 The première of the show entitled "Chopin 2.0 - new paradigm" took place in May 2010 during the La Folle Journee Festival in Japan, which was visited by 800 thousand people. The show enjoyed a considerable interest of the audience and attracted the attention of the media.

Frédéric Chopin's Warsaw - Frédéric Chopin was a great Polish composer and pianist, born in 1810 in Żelazowa Wola near Warsaw and deceased in Paris, France, in 1849. The most famous Varsovian,  Chopin spent the first 20 years of his life in the capital city of Poland. Till today numerous traces related to Chopin's memory are to be found in the entire city. At the request of Chopin, his heart was buried in Warsaw, in the Holy Cross Church. The modern Frédéric Chopin Museum houses the richest collection of Chopin keepsakes in the world. The statue of Chopin in the Łazienki Park has become a landmark of the city,  resounding with Chopin concerts held at its foot each year on summer Sundays between 12.00 and 16.00 hours. For over 80 years Warsaw has been the place where artists from all over the world take part in the Frédéric Chopin International Piano Contest, which recurrently has been the onset of a worldwide piano career. Since 2005, Warsaw has been the venue of the International Music Festival entitled "Chopin and his Europe". Summers, in turn, witness international master contests of interpretation of Frédéric Chopin's music during which young musicians from all over the world, supervised by outstanding professors, perfect their skills.

On the occasion of the jubilee year of 2010 Warsaw shall see many events commemorating the life and works of Frédéric Chopin. Moreover, a special mp3 guide retracing the footsteps of Chopin and special phone applications have been prepared for tourists. Detailed information is to be found at www.e-warsaw.pl/chopin2010.

Warsaw - the capital city of Poland, the country located in Central Europe, at the intersection of communication routes from the west to the east and from the north to the south of the continent. The city has an intriguing history and artistic climate, where West European and East European influences intertwine. Millions of people who come to Warsaw each year can admire reconstructed monuments and also enjoy the closeness of historical parks framing royal and baronial residences (The Saski Garden, The Łazienki Park or Wilanów) as well as modern compositions (the garden on the roof of the University Library). Warsaw is also an investor-friendly city. The authorities of Warsaw are open to new projects and initiatives, starting with those related to the communication infrastructure through the development of tourism and services to finish with construction industry, Therefore, the fact that Warsaw is listed amongst 20 best business locations in Europe is none of a surprise.