Having been adopted by many companies including leading mobile phone manufactures in Japan and other countries, MascotCapsule has been globally recognized as a de facto 3D rendering engine for embedded devices.

Although in FY 2009 the number of global shipments of mobile phones -- the major embedded device for MacotCapsule -- declined 0.9 % (*1) from a year earlier while domestic shipments also went down by 4.0 % (*2), HI has achieved the widespread adoption of MascotCapsule into devices other than mobile phones, allowing us to break this pleasant news.

Kazuo Kawabata, President and CEO of HI said, "We are very pleased that our MascotCapsule has been shipped in more than 600 million devices. Despite the still sluggish consumer spending in Japan and around the world and ongoing changes in business environments such as the rise of smart phones, MascotCapsule has been increasingly embedded into mobile phones as well as in other devices such as vehicle equipment and Karaoke devices due to our continued efforts. We are committed to further focusing on the development for smart phones with ever-increasing demands around the world."

"We will globally promote the provision of MascotCapsule as well as UI development solutions with high demands for an open platform such as AndroidTM that is increasingly being adopted. In terms of 3D stereopsis, which is attracting strong attention around the world, we will continue our efforts to provide technologies acquired from 3D graphics experiences and functions to support content development, as well as develop the technologies that immediately respond to market needs in the future," said Hirotaka Suzuki, CTO of HI.

MascotCapsule is an embedded 3D rendering engine that runs on a wide variety of devices including mobile phones and enables applications to execute real-time 3D graphic processing. It does not rely on any operating system or platforms; it can be selected from its seven lineups such as V1 through V4, nano, eruption, and Renderion according to the hardware execution environment. MascotCapsule enables much more enriched 3D expressions than 2D on limited resources.
http://www.hicorp.co.jp/english/product/index.html.

* MascotCapsule® is a registered trademark of HI CORPORATION in Japan.

* Other company names and product names are trademarks or registered trademarks of respective companies.

HI CORPORATION is a leading research and development company in middleware development for embedded devices. Its flagship product, a real-time 3D rendering engine "MascotCapsule," has been adopted by five Japanese mobile network operators as well as by major mobile phone manufacturers for their global releases. As of the end of March 2010, MascotCapsule was shipped with more than 600 million units of mobile phones worldwide. 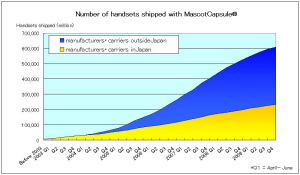