This test kit uses a reagent developed using Kaneka's molecular testing-related technologies. The reagent makes it possible to simultaneously detect four mutations*1 of spike protein (the N501Y, E484K, E484Q, and L452R mutations) with a single PCR test. Based on the mutation detection patterns, it can efficiently detect*2 variants (the Alpha, Delta, Kappa, and Beta or Gamma variants).

The PCR kit for detecting COVID-19 released by Kaneka last year received approval in June of this year as "KANEKA Direct RT-PCR kit SARS-CoV-2" for use as an In-Vitro Diagnostic reagent. It is widely used in medical facilities and testing centers. By adding this new COVID-19 variant PCR test kit to our lineup, we are contributing to the rapid detection of variants and the prevention of the spread of COVID-19.

Kaneka is taking a wide range of measures to combat COVID-19. These include the launching of the “Infection Initiative Team,” which conducts research and development regarding infection control measures including COVID-19, performing contract manufacturing of DNA vaccine APIs and intermediates, supplying the API used in “AviganTM”, developing antibody drugs, supplying PCR testing reagents and testing kits, and shipping vaccine using temperature controlled packages.

*1. These refer to mutations of the amino acids in viral spike proteins. The names are based on the mutation. In the N501Y mutation, the 501st amino acid in the spike protein has changed from N (asparagine) to Y (tyrosine). In the E484K mutation, the change was from E (glutamine acid) to K (lysine). In E484Q, it was from E (glutamine acid) to Q (glutamine). In L452R, it was from L (leucine) to R (arginine). 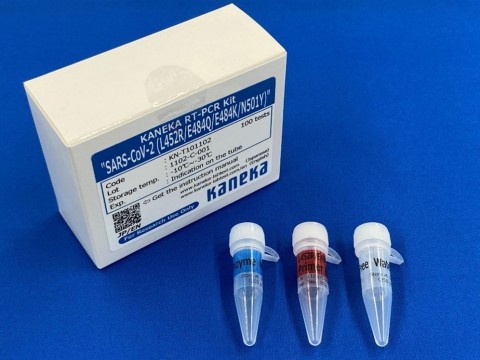