NEUCHATEL, Switzerland--(BUSINESS WIRE)--Masimo (NASDAQ: MASI) announced today the findings of a prospective, blinded observational study published in Annals of Intensive Care in which Dr. Jean-Baptiste Lascarrou and colleagues at the Centre Hospitalier Universitaire in Nantes, France evaluated the ability of Masimo ORi™ to predict mild hypoxemia during endotracheal intubation (ETI) in ICU patients.1 They concluded that the time between decrease in ORi and subsequent decrease in oxygen saturation (SpO2) “may allow preventive action,” and that a higher ORi value during preoxygenation was “independently protective against hypoxemia.”

Noting the importance of optimizing preoxygenation in patients needing ETI, the researchers sought to evaluate whether ORi could provide early warning of impending hypoxemia during the procedure, because ORi “supplies information beyond the range explored by SpO2.” Of the 51 patients who met the inclusion criteria, ORi (alongside SpO2) was monitored using Masimo Radical-7® Pulse CO-Oximeters® and rainbow® fingertip sensors when preoxygenation began. Values were recorded every two seconds, and attending clinicians were not aware of these values. The primary endpoint measured was the time between ORi decreasing below 0.4 and the onset of mild hypoxemia (defined as SpO2 < 97%). Secondarily, the investigators evaluated whether a decline in ORi during preoxygenation predicted the occurrence of mild hypoxemia during ETI.

The researchers concluded, “The median time between the ORi decrease below 0.4 and the SpO2 decrease below 97% during the apneic period was 81 seconds [34–146]. A higher ORi during preoxygenation was independently associated with a lower risk of mild hypoxemia (SpO2 < 97%).”

The researchers noted that the median 81 seconds of forewarning “may allow immediate intubation, early face-mask ventilation, insertion of a supraglottic device, or a call for help in the event of intubation difficulties.” In addition, they noted that “ORi monitoring can help identify patients who do not increase their oxygen reserve despite preoxygenation and are therefore at [increased] risk of desaturation during ETI. These patients may benefit from a longer preoxygenation period and/or a change in device.” The authors further noted that “an ORi decline might lead to the detection of a fault in the preoxygenation technique such as an insufficient oxygen flow rate or major leaks.”

As a study limitation, the authors noted that their findings cannot be generalized to ICU patients who did not meet the inclusion criteria, as those patient cohorts remain to be evaluated. The inclusion criteria for this study were ICU admission with a need for ETI and an SpO2/FiO2 ratio above 214. The SpO2/FiO2 ratio was measured during noninvasive ventilation or high-flow oxygen therapy; for conventional oxygen therapy, the fraction of inspired oxygen (FiO2) was calculated as FiO2 = 0.21 + O2 [rate in L/min] x 0.03.

ORi has not received FDA 510(k) clearance and is not available for sale in the United States.

Masimo (NASDAQ: MASI) is a global medical technology company that develops and produces a wide array of industry-leading monitoring technologies, including innovative measurements, sensors, patient monitors, and automation and connectivity solutions. Our mission is to improve patient outcomes, reduce the cost of care, and take noninvasive monitoring to new sites and applications. Masimo SET® Measure-through Motion and Low Perfusion™ pulse oximetry, introduced in 1995, has been shown in over 100 independent and objective studies to outperform other pulse oximetry technologies.2 Masimo SET® has also been shown to help clinicians reduce severe retinopathy of prematurity in neonates,3 improve CCHD screening in newborns,4 and, when used for continuous monitoring with Masimo Patient SafetyNet™ in post-surgical wards, reduce rapid response team activations, ICU transfers, and costs.5-8 Masimo SET® is estimated to be used on more than 200 million patients in leading hospitals and other healthcare settings around the world,9 and is the primary pulse oximetry at 9 of the top 10 hospitals as ranked in the 2021-22 U.S. News and World Report Best Hospitals Honor Roll.10 Masimo continues to refine SET® and in 2018, announced that SpO2 accuracy on RD SET® sensors during conditions of motion has been significantly improved, providing clinicians with even greater confidence that the SpO2 values they rely on accurately reflect a patient’s physiological status. In 2005, Masimo introduced rainbow® Pulse CO-Oximetry technology, allowing noninvasive and continuous monitoring of blood constituents that previously could only be measured invasively, including total hemoglobin (SpHb®), oxygen content (SpOC™), carboxyhemoglobin (SpCO®), methemoglobin (SpMet®), Pleth Variability Index (PVi®), RPVi™ (rainbow® PVi), and Oxygen Reserve Index (ORi™). In 2013, Masimo introduced the Root® Patient Monitoring and Connectivity Platform, built from the ground up to be as flexible and expandable as possible to facilitate the addition of other Masimo and third-party monitoring technologies; key Masimo additions include Next Generation SedLine® Brain Function Monitoring, O3® Regional Oximetry, and ISA™ Capnography with NomoLine® sampling lines. Masimo’s family of continuous and spot-check monitoring Pulse CO-Oximeters® includes devices designed for use in a variety of clinical and non-clinical scenarios, including tetherless, wearable technology, such as Radius-7® and Radius PPG™, portable devices like Rad-67®, fingertip pulse oximeters like MightySat® Rx, and devices available for use both in the hospital and at home, such as Rad-97®. Masimo hospital automation and connectivity solutions are centered around the Masimo Hospital Automation™ platform, and include Iris® Gateway, iSirona™, Patient SafetyNet, Replica™, Halo ION™, UniView®, UniView :60™, and Masimo SafetyNet™. Additional information about Masimo and its products may be found at www.masimo.com. Published clinical studies on Masimo products can be found at www.masimo.com/evidence/featured-studies/feature/.

ORi and RPVi have not received FDA 510(k) clearance and are not available for sale in the United States. The use of the trademark Patient SafetyNet is under license from University HealthSystem Consortium.

This press release includes forward-looking statements as defined in Section 27A of the Securities Act of 1933 and Section 21E of the Securities Exchange Act of 1934, in connection with the Private Securities Litigation Reform Act of 1995. These forward-looking statements include, among others, statements regarding the potential effectiveness of Masimo ORi™. These forward-looking statements are based on current expectations about future events affecting us and are subject to risks and uncertainties, all of which are difficult to predict and many of which are beyond our control and could cause our actual results to differ materially and adversely from those expressed in our forward-looking statements as a result of various risk factors, including, but not limited to: risks related to our assumptions regarding the repeatability of clinical results; risks that findings in the new study on Masimo ORi's ability to predict hypoxemia during ETI cannot be generalized; risks that researchers’ conclusion on the practical applications of Masimo ORi’s forewarning ability may not be accurate; risks related to our belief that Masimo's unique noninvasive measurement technologies, including Masimo ORi, contribute to positive clinical outcomes and patient safety; risks related to our belief that Masimo noninvasive medical breakthroughs provide cost-effective solutions and unique advantages; risks related to COVID-19; as well as other factors discussed in the "Risk Factors" section of our most recent reports filed with the Securities and Exchange Commission ("SEC"), which may be obtained for free at the SEC's website at www.sec.gov. Although we believe that the expectations reflected in our forward-looking statements are reasonable, we do not know whether our expectations will prove correct. All forward-looking statements included in this press release are expressly qualified in their entirety by the foregoing cautionary statements. You are cautioned not to place undue reliance on these forward-looking statements, which speak only as of today's date. We do not undertake any obligation to update, amend or clarify these statements or the "Risk Factors" contained in our most recent reports filed with the SEC, whether as a result of new information, future events or otherwise, except as may be required under the applicable securities laws. 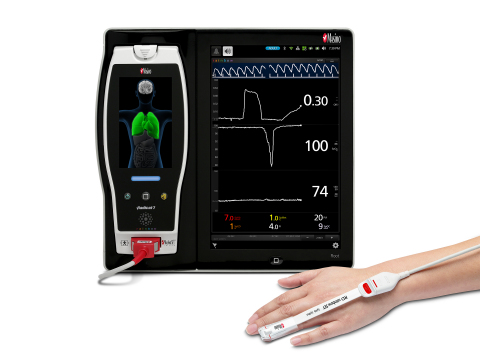