Panasonic sought the agreement with Ms. Osaka after observing that her values and perspectives on society deeply resonate with its own management philosophy, primarily with regard to the following three points:

First, Ms. Osaka takes social issues seriously, looking beyond tennis to share her views on what a better society would look like in her own words. The founder of Panasonic, Konosuke Matsushita, held the notion that a stable state of happiness comes only when both mental stability and material prosperity are secured. Based on this idea, the company endeavors to create an ideal society where all of us can enjoy lives that are both mentally fulfilling and affluent in the material sense.

Second, Ms. Osaka’s intense and powerful playing is a source of energy and courage for people all over the world. Panasonic has passed down the founder’s view that the mission of an enterprise is to achieve a prosperous society and to make people happy, and continues to work toward fulfilling a strong aspiration not only to provide products needed by society, but also to make customers who use them feel happy and uplifted.

And third, Ms. Osaka continues to grow and evolve as her magnificent track record being one of the world’s top athletes is the result of her tireless efforts to refine each and every move in the course of her daily training and matches. Panasonic also continues to grow and evolve in a range of fields, aiming to elevate its expertise for the benefit of customers and society and achieve constant evolution.

At this time, Panasonic and Ms. Osaka have concluded a brand ambassador agreement to join hands in an endeavor to create an ideal society for each and every person, positioning “A Champion. For Progress.” as our shared commitment.

Ms. Osaka has shown she has the courage to take action in the face of adversity. Panasonic will provide her with heartfelt support.

Naomi Osaka was born to a Japanese mother and a Haitian-American father, who moved her to New York in the United States when she was three years old. She is now based in Florida.

Panasonic Corporation is a global leader developing innovative technologies and solutions for wide-ranging applications in the consumer electronics, housing, automotive, and B2B sectors. The company, which celebrated its 100th anniversary in 2018, operates 522 subsidiaries and 69 associated companies worldwide and reported consolidated net sales of 6,698.8 billion yen for the year ended March 31, 2021. Committed to pursuing new value through collaborative innovation, the company uses its technologies to create a better life and a better world for customers. Learn more about Panasonic: https://www.panasonic.com/global 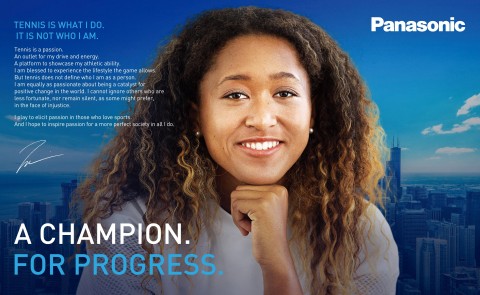