Starting Saturday, February 29, the second year of Reiwa (2020), a Shuri Castle-themed installation, “Float #01”, by up-and-coming artist GOTO Akinori, will be exhibited at the Naha Airport Domestic Departures Area C. A teaser installation, which began on Sunday, February 16, called “toki-BALLET #01” is currently being exhibited at the International Arrivals Concourse.

Ancient gusuku, or castle remains, can be found all around Okinawa, from the Amami Islands to Yaeyama Islands. The largest of these gusuku is the world heritage site Shuri Castle. On October 31, the first year of Reiwa (2019), this symbol of Okinawa tragically burned down. With six buildings including the central hall lost to the flames, the reconstruction is ongoing.

The motif of this artwork is Suimuiutaki, which was miraculously spared by the fire. Long revered as a sacred grove, it is believed to be a wellspring of mythical power. Moreover, the strong life force of the gajumaru tree is represented by Okinawan mythological spirits called the Kijimuna. In this piece, GOTO seeks to convey the life energy with which Okinawa hums, creating this project full of hopes for the reconstruction of Shuri Castle.

While Shuri Castle was originally built to protect Suimuiutaki, the two have come to be regarded as one and the same. Therefore, using art to convey the ancient spirits of the grove to as many people as possible is both a cultural and ideological endeavor linked to the reconstruction of Shuri Castle.

GOTO Akinori has produced numerous works exploring the concept of “life living in the passage of time”. For this piece, he visited Okinawa many times, researching Shuri Castle as well as other cultural assets. He has expressed the invisible power that resides in Okinawa’s history and in this sacred grove through art.

Our hope is that you, too, will feel the powerful energy of Okinawa as you take in this work of art. In addition to drawing power from this sacred place that represents Okinawa, your prayers will also lead to the quick restoration of Shuri Castle.

The Agency for Cultural Affairs, Government of Japan is hosting the “Japan Media Arts Distributed Museum” that will be deployed in 10 Japanese airports sequentially as part of a new project called the “Japanese cultural media arts dissemination initiative in airports and other institutions.”
The artists and creators featured in this exhibition capture the cultural resources borne out of various local cultures through fresh perspectives in places like airports, which serve as gateways to these regions. By showcasing the works of media arts, we invite visitors to explore the true spirit of these cultures throughout their travels.

Naha Airport Exhibition Summary
Theme: Shuri Castle
Artwork: ”Float #01” (New Artwork)
Numerous mesh figures rotate, and as the rays of light hit them, they appear to be walking. These represent people walking toward Shuri Castle after the fire, recorded and given shape by the artist. Shuri Castle has burned in the past, and every time it has been rebuilt based on the attention and wishes of people. The light gradually reveals the people moving toward Shuri Castle, becomes a whirlpool; becomes a swell, and manifests itself in front of the viewer’s eyes.

Artwork: ”toki- BALLET #01” (Created in 2017)
GOTO Akinori’s seminal “toki” series is inspired by the fundamental question: “what is movement?” From this starting point, he began to explore the concept of time, which is inextricably tied to the concept of movement. By tracing the conscious movements of ballet dancers, this specific piece is an attempt to extract time from movement.

Artist: GOTO Akinori
Born in Gifu Prefecture in 1984, GOTO is an artist and senior lecturer in Musashino Art University’s Department of Visual Communication Design. His representative work is his time sculpture “toki-“ series. He creates artwork focusing on the phenomena that emerge out of combining old techniques and media with modern technology, as well as the relationship between physical and digital. Major recent exhibitions he has been featured in include Ars Electronica Festival 2019 (Austria), SXSW Art Program 2017 (USA), and The Doraemon Exhibition (Japan). The UK’s National Media Museum and Germany’s Phaeno Science Centre also have collections of his work. 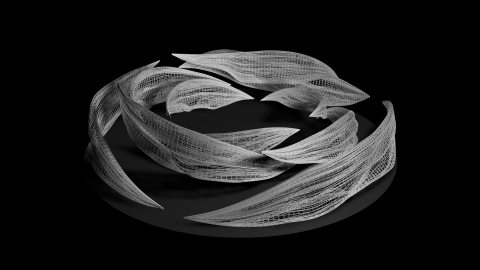 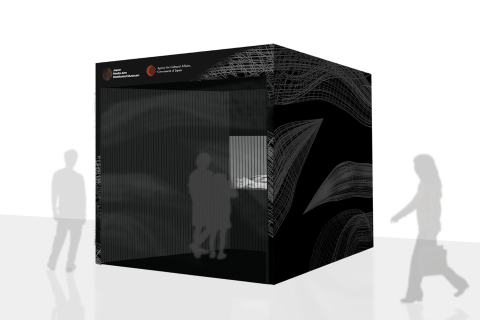