RAS AL KHAIMAH, United Arab Emirates--(BUSINESS WIRE)--The American University of Ras Al Khaimah (AURAK) and the British Council have signed an agreement for AURAK to act as a center for the IELTS exam administered by the British Council.

Under the agreement, AURAK will provide information to potential candidates about the IELTS, register candidates, and act as the venue for the test. According to the deal, the British Council will be responsible for administering the exams.

President of AURAK, Professor Hassan Hamdan Al Alkim, signed the deal on behalf of the University and Mr. Deep Adhikari did so for the British Council. The deal is due to run until the end of 2020 but can be extended by mutual agreement.

The British Council also agreed to cooperate in future with AURAK in liaising with British universities.

AURAK’s agreement with the British Council fits in with the University’s policy of expanding services and facilities for students. A bookshop and two cafés recently opened on the AURAK campus and further development is in progress.

The British Council is the United Kingdom’s international organization for cultural relations and educational opportunities. It teaches English and holds exams around the world.

AURAK is a nonprofit, government-owned institution of higher education which provides the local, regional and international communities with a North American-style education integrated with Arab customs and traditions. AURAK is licensed by the Ministry of Education in the United Arab Emirates and has been accredited in the United States of America by Southern Association of Colleges and Schools Commission on Colleges (SACSCOC) since December 2018. AURAK offers a total of 22 accredited undergraduate and graduate programs across a wide range of disciplines. 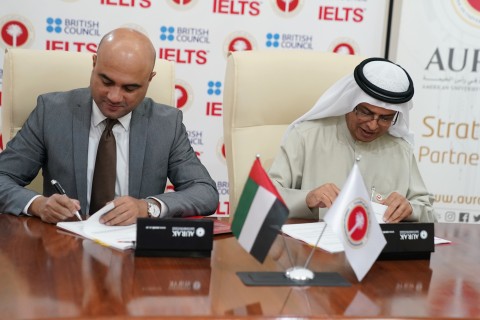