Company opened more than a hotel a day, achieved 6.6 percent net unit growth, and reached 6,110 properties in 119 countries and territories

“Throughout the last 100 years, Hilton has had a tremendous positive impact on billions of lives across the globe,” said Christopher J. Nassetta, president & chief executive officer, Hilton. “As we look toward the future, we will continue to prioritize sustainable and inclusive growth, enabling us to further strengthen the collective impact we have on the people and communities we serve.”

In 2019, Hilton achieved 6.6 percent net unit growth by adding nearly 470 hotels and reaching 6,110 properties globally with more than 971,000 rooms in 119 countries and territories. The company also grew its development pipeline to more than 387,000 rooms across 15 of its brands, supported by more than 116,000 rooms approved in 72 countries and territories. In addition, Hilton achieved a new construction start record of nearly 87,000 rooms.

“Hilton’s growth and performance are a testament to our resilient business model,” said Kevin Jacobs, chief financial officer, Hilton. “In addition to our record-breaking growth across approvals, construction starts and net units, we are delivering on our commitment to serve any guest, anywhere in the world, for any travel need.”

Travel with Purpose: Effect on Communities

*Industry data from STR
** Corporate, owned, managed and franchised employees globally
***As a result of opening properties across Hilton’s portfolio

Hilton (NYSE: HLT) is a leading global hospitality company with a portfolio of 18 world-class brands comprising more than 6,100 properties with more than 971,000 rooms, in 119 countries and territories. Dedicated to fulfilling its mission to be the world’s most hospitable company, Hilton welcomed more than 3 billion guests in its 100-year history, earned a top spot on the 2019 World’s Best Workplaces list, and was named the 2019 Global Industry Leader on the Dow Jones Sustainability Indices. Through the award-winning guest loyalty program Hilton Honors, more than 103 million members who book directly with Hilton can earn Points for hotel stays and experiences money can’t buy, plus enjoy instant benefits, including digital check-in with room selection, Digital Key, and Connected Room. Visit newsroom.hilton.com for more information, and connect with Hilton on Facebook, Twitter, LinkedIn, Instagram and YouTube. 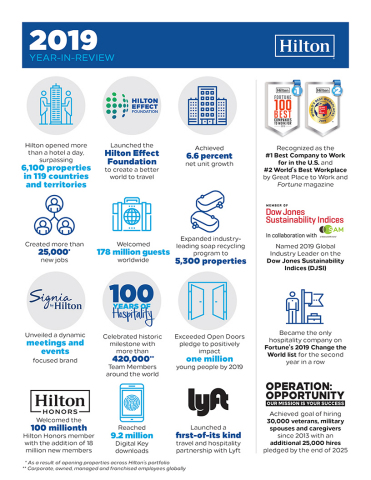