SHANGHAI & NEW YORK--(BUSINESS WIRE)--Origins Natural Resources Inc. and The Estée Lauder Companies Inc. (NYSE:EL) today announced the launch of the Origins brand in mainland China, at the Parkson Department Store in Shanghai. The brand expects to open four more doors in Shanghai and Beijing by June 30, 2010.

Origins was introduced by The Estée Lauder Companies in 1990 as a plant-based line of skin care, makeup and aromatherapy products that combine time-tested botanical ingredients with modern science. The brand’s mission is to create high-performance natural skin care that is powered by nature and proven by science by using potent plants, natural and organic ingredients and 100 percent natural essential oils. Origins’ long-standing commitment to protect the planet, its resources and all those who populate it is reaffirmed by its earth-friendly practices, packaging and policies.

“This is such an exciting day for Origins,” said Jane Lauder, Senior Vice President, General Manager of Origins, and a member of The Estée Lauder Companies’ Board of Directors. “We’re thrilled to be able to offer Chinese consumers the opportunity to experience Origins’ diverse range of high performance skin care products that are powered by nature and proven by science.”

“Chinese consumers are passionate about skin care and natural ingredients, so Origins will be very relevant to this market,” Carol Shen, General Manager of The Estée Lauder Companies in China, said. “In fact, the main ingredient in one of Origins most popular anti-aging collections, called ‘A Perfect World,’ is White Tea, an extremely potent antioxidant which comes from the mountains of the Fujian Province in southeast China.”

Attending the Origins launch with Ms. Lauder and Ms. Shen were William P. Lauder, Executive Chairman of The Estée Lauder Companies, who was one of the founders of the brand, Lynne Greene, Global Brand President for Clinique, Origins and Ojon, along with other Company executives.

“It’s great to be back in China. We’re delighted to introduce another one of our prestige brands into this fast-growing market,” Mr. Lauder said. “China is strategically important for our Company and we expect that Origins will help fuel our continued expansion here.”

In keeping with its long-standing mission to protect the planet, Origins has partnered with “Million Forest,” a reforestation project organized by The Climate Group, United Nations Environment Programme and China Green Foundation, to help preserve the trees and habitats of the Gansu Province. Origins will plant a tree for every product purchased in China through June 30, 2010, from its “A Perfect World” and “Make A Difference” collections.

The launch of Origins in China was also commemorated by a symbolic tree planting near the Origins counter inside the Parkson Department Store in Shanghai. Origins products are currently sold in more than 30 countries and territories. Through the years, the brand’s practices and partnerships have made an environmental impact that is equivalent to planting 2,800 acres or 2.2 square kilometers of trees worldwide.

The Estée Lauder Companies first entered China in 1993 with two of its brands, Estée Lauder and Clinique. Nine brands are now sold in China and together The Estée Lauder Companies is the number one company within its department store distribution, based on annual retail sales in 2009. One of the main areas of strategic focus for The Estée Lauder Companies is Asian skin care, with a particular emphasis on serving Chinese consumers. In 2005, the Company opened a research and development center in Shanghai to study the safety and efficacy of topical botanical and synthetic materials and explore the basis for differences in the response of human skin to environmental stressors. The center is also focused on marketing and consumer research, as well as raw material and formula development.

China is one of The Estée Lauder Companies’ fastest growing markets. In fiscal 2009, the Company’s sales in China grew nearly 30 percent. It is believed that in the next decade, China’s beauty market could rival the size of the market in the United States. Other Estée Lauder Companies’ brands sold in China are Estée Lauder, Clinique, La Mer, M·A·C, Bobbi Brown, Aramis and the licensed brands Tommy Hilfiger and Donna Karan. The products are sold in upscale department stores and perfumeries in 33 major Chinese cities. The Company has also launched e-commerce sites in China for Clinique, Estée Lauder and La Mer.

The forward-looking statements in this press release, including those in the individuals’ remarks, involve risks and uncertainties. Factors that could cause actual results to differ materially from those forward-looking statements include competition, changes in regulation, risks of doing business abroad and the other risks described in the Company’s filings with the U.S. Securities and Exchange Commission, including the most recent quarterly report on Form 10-Q. 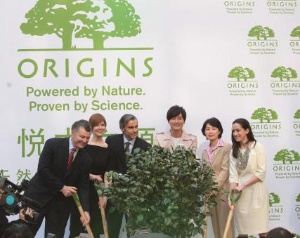