South Korea is one of the leading fuel cell markets in the world and has been a core target market for Ceres. It benefits from a supportive regulatory regime and ambitious long-term targets. The South Korean government recently announced several initiatives to promote increased use of renewable generation and hydrogen technology and is targeting fuel cell manufacture for power generation to reach an output of 15 GW by 2040, up from 300 MW today.

Doosan has established itself as a world leader in the fuel cell industry and is now adding Solid Oxide technology to its existing portfolio of fuel cell technologies. Doosan’s existing stationary fuel cell business exceeded 1 trillion won (c. $850 million) in orders for the first time in 2018, three years after entering the market.

Doosan and Ceres will also explore an expansion of the collaboration to access broader applications within South Korea and internationally as well as the potential to include manufacturing.

“South Korea is a key market for us given their ambition to be a world leader in hydrogen and fuel cells. Doosan have clearly established themselves as the leader in this sector and are the ideal partner for us to enter into the Korean market, adding to our strategic partnerships with Weichai in China and Bosch.” 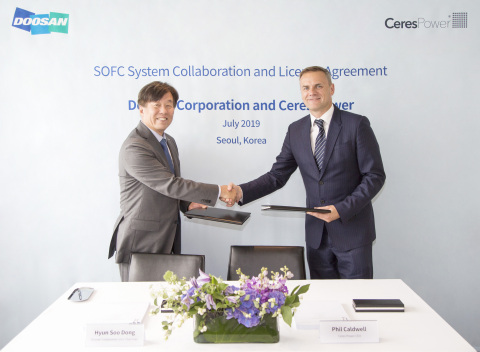