GUANGZHOU, China--(BUSINESS WIRE)--On the afternoon of May 9, with Mr. Chen Hongxian, Director General of Guangzhou Port Authority handing over the IAPH flag to Luc Arnouts from Port of Antwerp, which is the next host of the Conference, IAPH 2019 World Ports Conference wrapped up with full success. IAPH president Santiago Garcia Mila as well as Port of Antwerp vice president Luc Arnouts spoke highly of the Conference and expressed profound gratitude to the organizer.

During the Conference, Guangzhou Port accomplished to sign sister-port agreements with 8 international ports, adding up to a sister-port of 50 members in total. A number of collaboration projects such as “Green Port and Shipping” initiative and “Greater Bay Area 5G Port Innovation Center” were also launched in the city.

IAPH 2019 World Ports Conference was warmly embraced by the city as evidenced by its record high number of participants and sessions. The efforts and spirit to “Collaborate Now Create Future” will contribute another legend to the world’s port and shipping circles and inspire the city to go global for a better future. 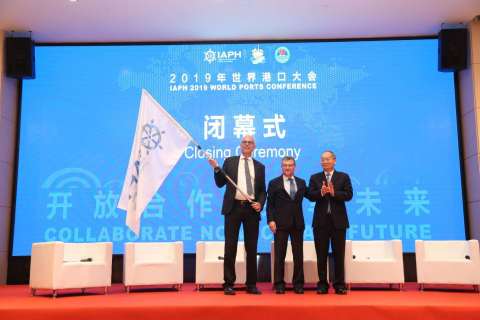 Mr. Chen Hongxian(1st from Right), Director General of Guangzhou Port Authority handing over the IAPH flag to Luc Arnouts from Port of Antwerp (1st from Left). In the middle is Santiago G Mila, President of the International Association of Ports and Harbours, IAPH (Photo: Business Wire)