MCLEAN, Va.--(BUSINESS WIRE)--As Hilton (NYSE: HLT) heads toward a milestone 100th anniversary in 2019, best-selling author and Stanford Business professor Chip Heath will unveil the impact the first global hotel company has had around the world in a new book titled The Hilton Effect. Business author Karla Starr joined him in the examination of the company founded by Conrad Hilton, a dreamer who aspired to create much more than just a comfortable place to sleep.

Over the last century, Hilton has grown from a single hotel in Cisco, Texas, to nearly 5,500 hotels and 14 brands in 106 countries and territories. Hilton’s hotels have hosted more than 3 billion guests since 1919 and enlisted nearly 10 million Team Members in the company’s mission to fill the Earth with the light and warmth of hospitality.

The Hilton Effect, as the authors define it, is the positive, world-altering impact that Hilton has had, and continues to have, on billions of lives and thousands of communities around the globe – pioneering new travel markets and bringing people and cultures together to make the world feel smaller, while expanding horizons and opportunities.

“Most organizations celebrating their 100th birthday would be content to throw themselves a party, but Hilton opted to hire a pair of skeptical outsiders – business authors with backgrounds in social science – to examine its impact on the world,” Heath said. “The stories that emerged were even more remarkable than we initially suspected and what Hilton employees considered to be just another day at work was quite extraordinary.”

Through extensive independent research and in-depth interviews, Heath and Starr found deeper meaning in the history and influence of the company over the past century. The authors focused on three areas that define The Hilton Effect:

The Hilton Effect on Guests

Conrad Hilton was a visionary who had his first experience in hospitality hosting weary travelers on the road for work at his family’s boarding house and later at his first hotels.

Since then, Heath said, the company Hilton built has had an unmatched impact on modern travel. Hilton was the first hotel company to cater extensively to business travelers so they can focus their time and energy on the all-important meeting or negotiation, rather than the challenges of navigating an unfamiliar place. And throughout its history, Hilton has introduced numerous innovations offering comfort and convenience to all guests. Those industry firsts include air-conditioned hotel lobbies, and cold running water and televisions in guest rooms – not to mention food and beverage items like the piña colada and brownie.

Hilton has influenced billions of guests by easing travel, creating familiar, comfortable, and efficient systems to empower travelers to broaden and build perspectives, social connections and trust, thus furthering their understanding and appreciation for other cultures and ideas:

The Hilton Effect on Team Members

As recounted by Heath, Hilton has impacted millions of employees – which are referred to as Team Members at the company – by fostering the powerful entrepreneurial spirit and autonomy that Conrad Hilton established. That legacy continues to create grassroots innovation across all levels and departments, offering extensive career opportunities:

The Hilton Effect on Communities and Economies

Hilton has been the first to enter numerous emerging markets around the globe, has often remained during difficult times, and has led the charge on revitalizing areas that lost hope. By serving this important role, Hilton has become woven into the history, economies, and infrastructure of communities all over the world:

“Conrad Hilton’s vision was simple – to fill the earth with the light and warmth of hospitality – but he couldn’t have predicted how committing to his dream would take on different meanings throughout the world over the 100 years,” said Nassetta. “With our 100th milestone around the corner, we are welcoming more guests, employing more people and opening more hotels than ever before – and our impact will continue to shape the globe for the next century and beyond, affecting future generations of travelers.”

The Hilton Effect by Chip Heath and Karla Starr is available for download here and will soon be available on Amazon. Proceeds from Amazon will benefit The Hilton Responds Fund, which provides support to Hilton Team Members and the communities they serve in times of need.

Click here to watch a video on the Hilton Effect.

Hilton (NYSE: HLT) is a leading global hospitality company, with a portfolio of 14 world-class brands comprising more than 5,400 properties with nearly 880,000 rooms, in 106 countries and territories. Hilton is dedicated to fulfilling its mission to be the world’s most hospitable company by delivering exceptional experiences – every hotel, every guest, every time. The company's portfolio includes Hilton Hotels & Resorts, Waldorf Astoria Hotels & Resorts, Conrad Hotels & Resorts, Canopy by Hilton, Curio Collection by Hilton, DoubleTree by Hilton, Tapestry Collection by Hilton, Embassy Suites by Hilton, Hilton Garden Inn, Hampton by Hilton, Tru by Hilton, Homewood Suites by Hilton, Home2 Suites by Hilton and Hilton Grand Vacations. The company also manages an award-winning customer loyalty program, Hilton Honors. Hilton Honors members who book directly through preferred Hilton channels have access to instant benefits, including a flexible payment slider that allows members to choose exactly how many Points to combine with money, an exclusive member discount that can’t be found anywhere else, and free standard Wi-Fi. Visit newsroom.hilton.com for more information, and connect with Hilton on Facebook,Twitter, LinkedIn, Instagram and YouTube. 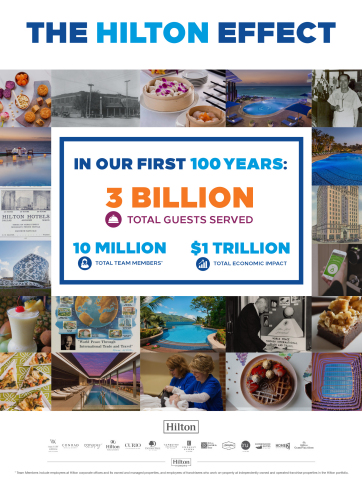