For the nine months ended 30 September 2018, Net Profit reached QAR10.8 billion (USD3.0 billion), up by 6% compared to same period last year, despite the impact of the Turkish Lira devaluation.

Total assets increased to QAR853 billion (USD234 billion), up by 8% from September 2017. The key driver of total assets growth was from loans and advances which grew by 4% to reach QAR604 billion (USD166 billion). This was mainly funded by customer deposits which increased by 7% to reach QAR615 billion (USD169 billion) from September 2017. The growth of the Group assets and liabilities has been partly affected by the devaluation in the Turkish Lira. Despite the devaluation impact, QNB’s strong asset liability management capabilities helped QNB Group to improve its loans to deposits ratio to 98.3% as of 30 September 2018.

The Group’s drive for operational efficiency is yielding cost-savings in addition to sustainable revenue generating sources, enabling the Group to improve the efficiency ratio (cost to income ratio) to 26%, from 29% last year, which is considered one of the best ratios among large financial institutions in the MEA region.

Capital Adequacy Ratio (CAR) as of 30 September 2018 amounted to 15.6%, higher than the regulatory minimum requirements of the Qatar Central Bank and Basel Committee. Currency headwinds in our core markets had limited impact on the CAR.

QNB's successful funding from the international markets during the year includes, amongst others, (1) capital market issuances of USD560 million (AUD700 million) with a 5- and 10-year maturity in Australia and (2) USD720 million bonds with a 30-year maturity in Taiwan. This reflects the Group’s success in diversifying funding sources by entering new debt markets, sourcing sustainable long-term funding, extending the maturity profile of funding sources and the trust of international investors in the strong financial position of QNB Group and its strategy.

QNB Group serves a customer base of more than 23 million customers with more than 29,000 staff resources operating from more than 1,200 locations and 4,300 ATMs. 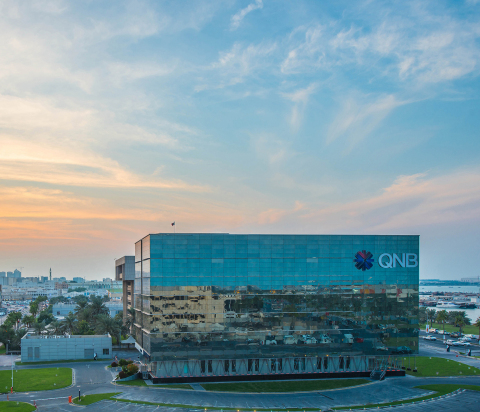