SHARJAH, United Arab Emirates--(BUSINESS WIRE)--The Big Heart Foundation (TBHF), a global humanitarian charity based in Sharjah, UAE, is funding the second phase of a school for girls in Pakistan in keeping with its dedication to ensuring children have access to education, enabling them to contribute to the development of their communities. The project will be funded by the TBHF ‘Girl Child Fund’, in cooperation with the ‘Malala Fund’, launched by Nobel Laureate and education activist, Malala Yousafzai.The initiative was announced in the presence of Sheikh Sultan bin Ahmed Al Qasimi, The Big Heart Foundation’s Humanitarian Envoy, and Malala Yousafzai following an agreement signed in Oxford by Mariam Al Hammadi, Director of TBHF, and Farah Mohamed, CEO of the Malala Fund.

The school is being constructed in Swat Valley, Yousafzai’s home district in Pakistan. The TBHF donation of USD 700,000 will fund the school’s second phase of development, which is set for completion in April 2018. It will open its doors to 350 girls in its 11 classrooms. Gradually, the educational services and school infrastructure will expand to accommodate 1,000 students of all grades.

Commenting on the agreement, Malala Yousafzai, said: "I overwhelmingly thank The Big Heart Foundation for believing in my dream of a world where girls can choose their own future path. With their support, the Malala Fund can provide education for girls in my hometown Swat Valley in Pakistan."

In June 2015, Her Highness Sheikha Jawaher bint Mohammed Al Qasimi officially launched The Big Heart Foundation to coincide with the World Refugee Day. The foundation aims to protect and enable vulnerable and marginalized children and their families, focusing primarily on the Arab world, but extending support to areas most in need. 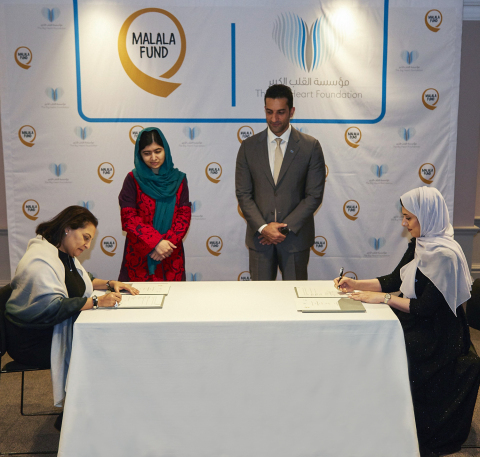