DAVOS, Switzerland--(BUSINESS WIRE)--UNICEF and the International Zinc Association (IZA) announced today the launch of the “Zinc Saves Kids” campaign. The initiative will raise funds to support UNICEF’s zinc supplementation programs for children in developing countries. The provision of zinc supplements for children suffering from diarrhea, pneumonia and malaria can aid a quick recovery, prevent future episodes and save the lives of children.

At a meeting during the World Economic Forum, Don Lindsay, Chairman of the IZA and President and CEO of Teck Resources, presented UNICEF Executive Director Ann Veneman with a check for US$1.66 million as part of IZA’s multi-year commitment to this initiative. In addition, IZA will contribute to support UNICEF’s relief work in Haiti.

Zinc is essential for all living organisms. In children, zinc is vital for brain development, growth and the immune function. However, according to the World Health Organization (WHO), zinc deficiency is one of the leading risk factors associated with diseases such as diarrhea, pneumonia and malaria. 800,000 people die annually due to zinc deficiency, of which 450,000 are children under the age of five.

In 2008, the Copenhagen Consensus – a panel of eight leading economists including five Nobel Laureates – noted that child mortality and malnutrition can be solved in a cost-effective manner by adding zinc and vitamin A to diets.

“Scaling up the use of therapeutic zinc could prevent an estimated 300,000 diarrhea-associated child deaths annually,” said Ann Veneman, UNICEF Executive Director. “This initiative will expand delivery of zinc supplementation to children in the world’s poorest and most remote communities.”

“Children are our greatest resource, and our industry is committed to working with UNICEF to raise the awareness of zinc deficiency in children worldwide and to raise funds to help solve the problem,” said Mr. Lindsay.

UNICEF is on the ground in over 150 countries and territories to help children survive and thrive, from early childhood through adolescence. The world’s largest provider of vaccines for developing countries, UNICEF supports child health and nutrition, safe water and sanitation, quality basic education for all boys and girls, and the protection of children from violence, exploitation, and AIDS. UNICEF is funded entirely by the voluntary contributions of individuals, businesses, foundations and governments. 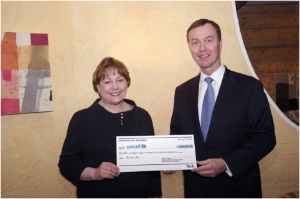