Fullshare experienced a 15.1% jump in its stock price when trading resumed 4th May ,2017. On 25 April 2017, the price of Fullshare dropped drastically by 11.89% when a short selling report was published by Glaucus, but the company staged a retaliation on 2 May 2017 by making an announcement to refute Glaucus’s allegations. According to market sources, Fullshare plans to repurchase its stocks at a budget of RMB 4 billion, and it had already announced its intentions to major shareholders on 28 April 2017. 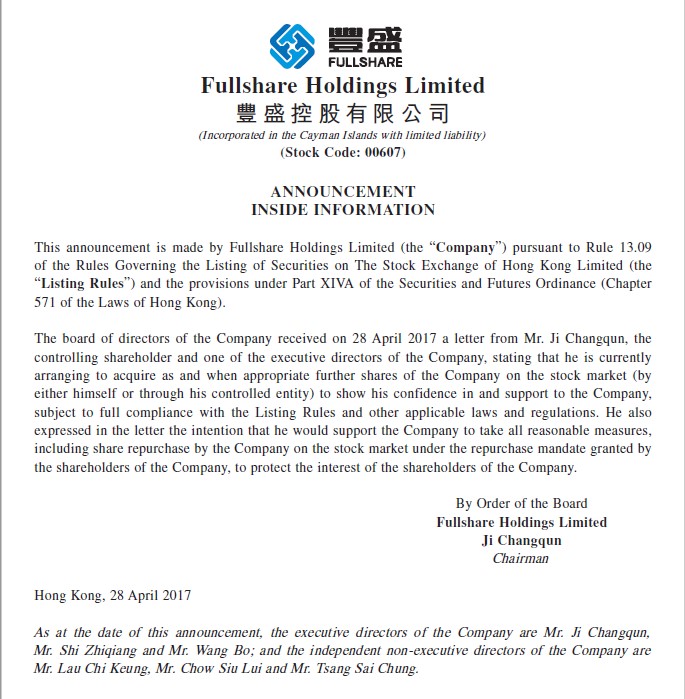 According to inside sources, Glaucus laid out its attack to short sell Fullshare as early as February 2017 when Fullshare was put on the list of ‘Designated Securities Eligible for Short Selling’. Considering the company’s profit margin, Fullshare should not appear on the list, and since there are specific procedures to have a company eligible for short selling, the conclusion is that it was all the short-sellers’ doing. Sources also revealed that short-sellers borrowed 950 million shares of Fullshare at an average selling cost of HK$3 on 10 February 2017.

In the case of a short sale attack, it is a game of capital. After  4th May ,2017’s resumption, the stock price of Fullshare went up 17.46%, which is very close to the short-sellers’ HK$3 selling cost, meaning that they will most likely face the risk of margin calls. In fact, these profit-making short-sellers are in the habit of forming alliances, so there is the possibility that they are giving each other capital support in order to maintain the maintenance margin; however, the number of shares they can sell will likely to decrease as Fullshare is repurchasing its stocks.

Fullshare has wealthy shareholders, and capital and shares are important factors that only have a temporary effect on the stock price, making short-sellers’ decision to short sell Fullshare very unwise. According to Fullshare’s 2016 annual report, Magnolia Wealth, managed by Ji Changqun, is the largest shareholder with a stake of 46.58%, and China Huarong Asset Management comes in second with a stake of 9.88%.

Ji Changqun is a wealthy businessman from Nanjing. He is the Vice Chairman of Jiang Su Province Enterprise Directors Association, and Nanjing Private and Individual Economy Association. According to market sources, on 2 May 2017, Jiangsu Sushang development Promotion Association, along with 27 major enterprises from Guangzhou Anhui Chamber Of Commerce and JiangSu Non-state-owned Investment Holding, voiced their support for Fullshare, and encouraged Chinese enterprises to band together in battling the malicious acts of short selling.

As for China Huarong Asset Management, it is one of the top four asset management companies in Mainland China, and its work is instrumental to the appreciation of state-owned assets; therefore, equity investment is one of its major businesses. According to Fullshare’s annual report, Superb Colour is a wholly-owned subsidiary of China Huarong International, in which Huarong Real Estate holds an 88.1% stake; while Huarong Real Estate is a wholly-owned subsidiary of China Huarong Asset Management, in which the Ministry of Finance owns a 63.36% stake. 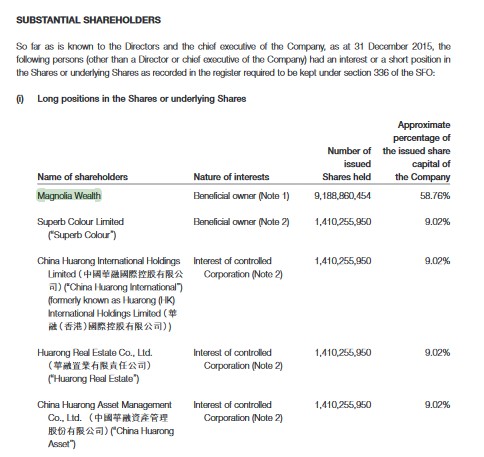 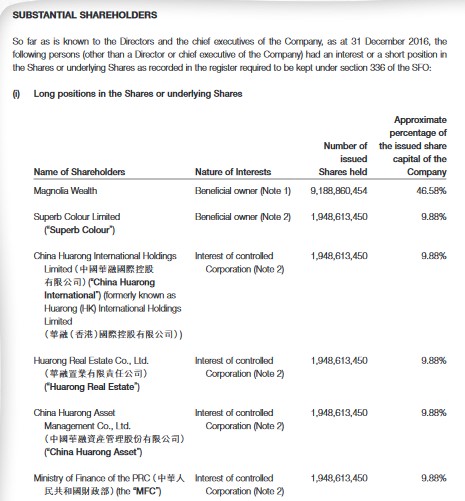 China Huarong has always been a cautious player when it comes to equity investment. When it first increased stake in Fullshare on 9 January 2015, Magnolia Wealth signed an equity transfer agreement with Superb Colour Limited, a subsidiary of China Huarong, to transfer 962 million shares of Fullshare to the latter, giving it a stake of 7.09% in the company which is worth $500 million.

In December 2015, Fullshare initiated a return of allotment of shares, and China Huarong bought 4.487 billion shares through subscription. As at the time of the 2015 annual report, China Huarong held a total 9.02% of Fullshare’s shares which translated to 14.1026 billion shares. In 2016, China Hurong further increased its stake to 19.4861 billion shares (9.88% stake), which meant an increase of 5.3835 billion shares compared with the previous year.

It can be assumed that China Huarong’s multiple decisions to increase stake were made based on the strategic development of Fullshare. In 2015, Fullshare began its business transformation from a real estate business to a platform-based enterprise with diverse businesses. Fullshare’s current businesses include five major categories: investment, real estate, new energy, healthcare, and tourism, with the healthcare and new energy sectors having the most potential to create revenue.

As for Zall Development, the company has a strong ability to generate profit, and currently has an 8.83% stake in Fullshare. According to Fullshare’s 2016 annual report, the company had a net profit of $20.57 billion, meaning Zall Development took in a profit of $1.82 billion. However, Zall Development is looking into changing its business model, and based on its 2016 annual report, the company will develop a cloud market trading and service system combining online and offline business, on the basis of physical market, logistics and property, to form the world’s largest B2B trading platform and database. 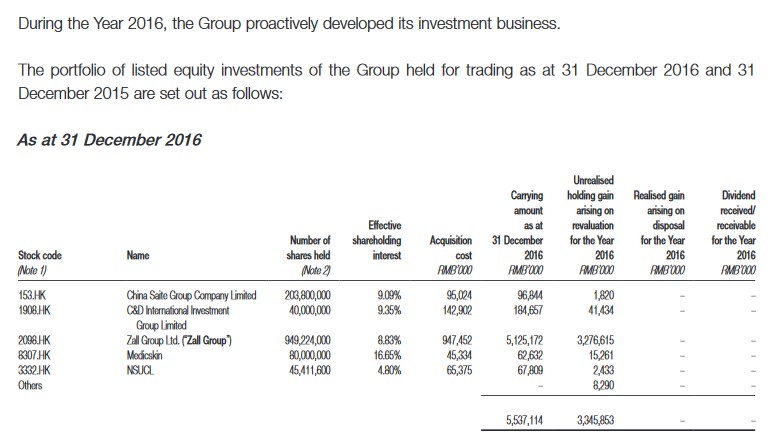 In addition, according to inside sources, Fullshare is actively going into the childcare and education market for children aged 0 to 6. The company has already acquired an Australian early childhood education institution named Sparrow Early, and plans to forge a new childcare market in Chengdu and Beijing, forming a coordinated development at home and abroad. The childcare market is very different from K-12 as it is derived from the change in the quality of life, with a clientele earning a substantial income. With the overall income level in Mainland China increasing by the year, the childcare market poses great potential in the future.

Received no less than $10 billion in financing from CITIC Bank, short-sellers are facing great losses

Even when under the attack of short-sellers, Fullshare possesses a credibility that is recognized by banks. According to Fullshare’s announcement on 3 May 2017, CITIC Bank has entered into a strategic cooperation agreement with the company to provide Fullshare and/or its related parties with a comprehensive credit and financing limit of not less than RMB10 billion. So, if Fullshare is as ‘worthless’ as Glaucus claimed, why would CITIC Bank offer the company such a high amount of financing? 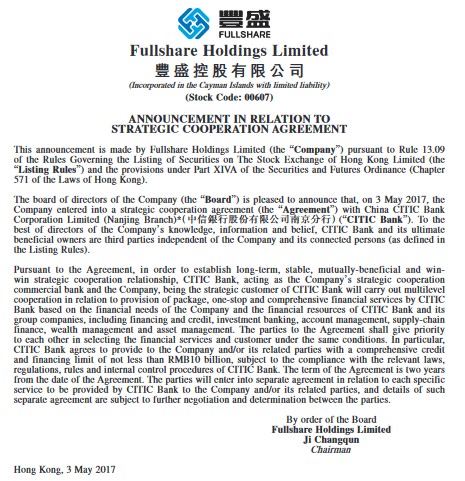 Furthermore, the lies spread by the short selling research company Glaucus are slowly falling apart. On 2 May 2017, Zall Development made a voluntary announcement on the release of share pledge over its 6.8 billion shares in Fullshare, which gives a good proof of the company’s abundant cash flow. However, Glaucus did not cease its attack, on the day when trading resumed for Fullshare, the short selling research company made a claim that the stock price of Fullshare is only worth HK$0.55-0.77. This is a usual tactic of Glaucus to pursue and attack a company on the day of resumption, which also applied to the cases of Ozner Water and CTEG. 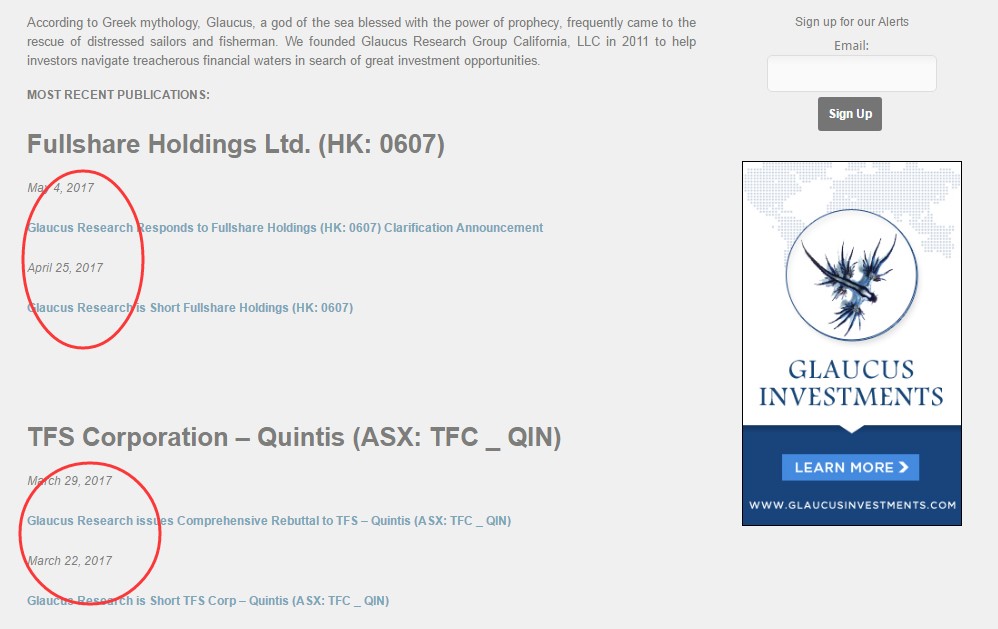 An online article titled ‘Tesla Short Sellers Have Lost $3.7 Billion In 2017 So Far’ reveals how the skyrocketing stock price of Tesla had caused short-sellers to suffer an enormous loss of US$3.7 billion (HK$28.86 billion). The situation was similar to Fullshare’s. With Fullshare closing at HK$2.96 (+17.46%) today, if its price continues to soar, short-sellers will definitely suffer massive losses.