PARIS--(BUSINESS WIRE)--The third largest emirate of the United Arab Emirates (UAE) – Sharjah – was recently declared a special Guest of Honour at Salon Livre Paris’ (Paris Book Fair’s) 2018 edition. The announcement aligns with France’s longstanding appreciation of Sharjah’s commitment to artistic and cultural excellence. The emirate will be seen taking centre stage at the book fair next year, with a rich Arabic cultural and literary showcase.The invitation was made by French President, François Hollande, to His Highness Sheikh Dr. Sultan bin Muhammad Al Qasimi, Member of the UAE Supreme Council and Ruler of Sharjah, during his visit to the Sharjah Book Authority’s (SBA) stand at the recently concluded Paris Book Fair.

The decision reflects a successive step in a series of ongoing efforts, which are being made by France and the UAE to strengthen bilateral relations by celebrating their shared passion for cultural engagement and exchange.

Addressing the launch ceremony of His book in Paris, Sous le Drapeau de l’occupant, His Highness Sheikh Dr Sultan Al Qasimi said: “The culture of France has been a long-cherished muse for my writings. I have a library full of French publications – the ones dealing with Egypt’s architectural treasures, its rich historical, environmental and human legacy are my favourite. These works aren’t just masterpieces, but go great lengths to reflect the French people’s passion for diving fearlessly into the cultures of the world.”

Earlier this year, the UAE witnessed the Emirati-French cultural programme featuring a diverse array of events including equestrian choreography, dedicated to the celebration of the upcoming Louvre Abu Dhabi.

The emirate of Sharjah enjoys a unique cultural position, which it has forged by fusing its rich Islamic heritage with an open acceptance of world cultures. In 1998, Sharjah was named the ‘Cultural Capital of the Arab World’ by UNESCO, and in 2014 the ‘Capital of Islamic Culture’ by Islamic Organization for Education, Science and Culture (ISESCO). 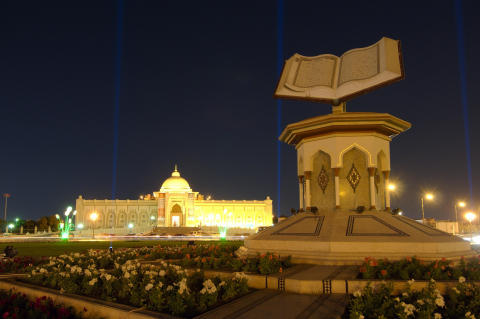