ABU DHABI, United Arab Emirates--(BUSINESS WIRE)--The General Directorate of Civil Defense achieved a new Guinness World Record by forming the world’s largest flag made of pencils. In a ceremony held on Tuesday and coinciding with the celebrations of the 43rd UAE National Day, the UAE flag was displayed in the courtyard of the Emirates Palace in Abu Dhabi.

The General Directorate of Civil Defense shattered the previous record by constructing a national flag that stretched over 1,000 square meters with 1 million pencils, using 250,000 for each color. The General Directorate of Civil Defense received the GUINNESS WORLD RECORDS Record Holder certificate for the World’s Largest National Flag Made of Pencils.

Major General Al Matroushi presented the achievement to His Highness Sheikh Khalifa bin Zayed Al Nahyan, President of the UAE; His Highness Sheikh Mohammed bin Rashid Al Maktoum, UAE Vice President, Prime Minister and Ruler of Dubai; and the Ministry of Interior, represented by the General Directorate of Civil Defense which supervised the featured work. Major General Al Matroushi commended the achievements of the kindhearted journey of the UAE in every field and said: “Celebrating the 43rd National Day is a beloved opportunity to renew our loyalty and belonging to the leadership, protect the legacy of our founding fathers, and instill the significance of the union in the hearts of our generations who currently enjoy its blessings and wealth.”

The ceremony commenced with the national anthem, followed by Major General Al Matroushi and Major General Al Raisi placing the last remaining pencil in the flag. A large number of students from public and private schools in Abu Dhabi participated in the official inauguration of the world’s largest pencil-made flag. 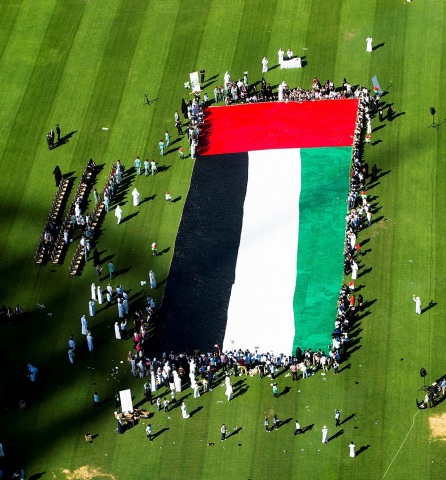