In a Press Conference Held Today: Saif bin Zayed Reveals Criminal Details that HH Described as “A Slap to Humanity”

His Highness explained that after committing her first crime, the “Niqabi” suspect went to another building at the Abu Dhabi Corniche where she planted a primitive bomb on the doorstep of an Egyptian American doctor’s house, M. H. (46 years). The police forces were able to dismantle the bomb before it was detonated.

In the press conference held at the Abu Dhabi Police General Headquarters, HH Sheikh Saif expressed his deep sorrow to witness such crimes in a country that is characterized by security and safety. Sheikh Saif described the crime as “a slap to every noble human value that the UAE cherishes - which are derived from the teachings of Islam and the genuine Arab heritage.”

Lt. General HH Sheikh Saif bin Zayed Al Nahyan said: “We stand today before a crime that is alien to our secure country - a crime that has disregarded all human values and norms and targeted innocent people. The victim of this brutal crime was a school teacher who was committed to building strong future generations and was known for her dedication to work. The victim was not only a teacher - she was also a mother of three children.”

Colonel Dr. Rashid Borshid, Head of the Criminal Investigation Department (CID) at Abu Dhabi Police said: “The police dismantled the bomb that targeted the life of an Egyptian American doctor and his family. The two consecutive incidents involving the murder and the bomb led us to believe there was one suspect for both crimes due to the matching descriptions.”

His Highness explained that the suspect targeted her victims based on nationality alone and had nothing to do with personal issues, and said: “Your brothers at the Ministry of Interior and security forces have worked night and day to identify and apprehend the suspect - despite all of her attempts to disguise herself. I would like to announce to you that she was arrested and is now in the custody of the police.” The collective efforts of all parties who responded to the directions of the higher leadership led to the arrest of the suspect who has confessed to committing the crimes.

The Security Media Department displayed a video explaining the details of the crime which included images taken from CCTV. The video also highlighted the search and inspection procedures conducted by the police and security forces, which eventually led to the arrest of the suspect solving the mystery behind the crime.

The full video released by the UAE MoI: http://www.youtube.com/watch?v=iSefyJ0U04E&feature=youtu.be 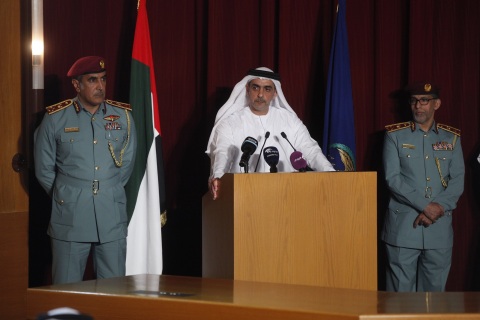 HH Sheikh Saif bin Zayed during the press conference in which he revealed the details of Al Reem Island crime (Photo: Business Wire)