ABU DHABI, United Arab Emirates--(BUSINESS WIRE)--More than 20,000 spectators in the German capital Berlin positively reacted to the melodies of the Abu Dhabi Police (ADP) Music Band as they played their national and traditional pieces in the Max-Schmeling-Halle, the dedicated hall for grand music concerts in the city. The performances were a part of the Berlin Military Music Festival “Berlin Tattoo 2014” which was held in the Federal Republic of Germany from 31st Oct. to 2nd Nov., 2014.

Colonel Saif Saeed Al Shamesi, Chief of the Cultural and Social Activity Section at the Abu Dhabi Police Clubs and Sports Activities Department, Chairman of the Committee accompanying the Police Music Band, said that the members of the ADP Music Band performed an impressive and distinguished show. The show started with the “Arab March of Independence” preceded by the Emirati flag, and was followed by a piece representing maritime heritage entitled “Hoa Ya Mal” played with the oyster instrument famous for producing sounds similar to sea waves. Other traditional Emirati songs played included the “Al-Aialah Show” entitled “Dari Almha,” in conjunction with the UAE celebrations of its National Flag Day.

He added, “At the conclusion of its first show, the band surprised the audience with the German March entitled ‘Muss I Denn’. The audience gave a lengthy applause to the band for their precise and creative performance of this renowned German musical piece.”

Through their participation, the band endeavors to introduce the true UAE heritage, and to reflect the image of modernity that includes an artistic heritage rich with patriotism and unity.

Colonel Al Shamesi said that the festival is an important event with a long history of including military bands, and is one of the most important events in Europe and the world. He noted that the organizing committee selects only the most distinguished bands to participate in the event. 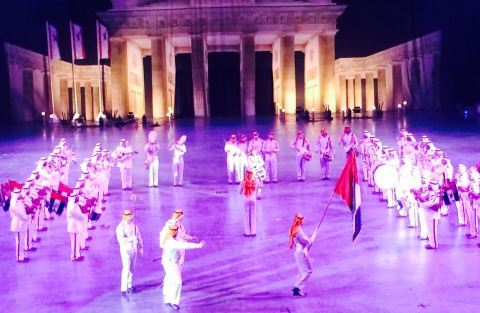