Company celebrates one year of its Forest Conservation Policy, setting out challenges to be tackled

JAKARTA, Indonesia--(BUSINESS WIRE)--Asia Pulp & Paper Group (APP) launched its Forest Conservation Policy (FCP) Anniversary Report with a call for NGOs, Governments and businesses to work together in an effort to help tackle deforestation in Indonesia.

On February 5th 2013, APP announced a permanent end to natural forest clearance across its entire supply chain through the introduction of its FCP. Covering over 2.6 million hectares of forest concessions, APP’s FCP represented a breakthrough moment for the global protection of natural forest. The commitment is the largest and most ambitious plan for the implementation of landscape level High Conservation Value (HCV) and High Carbon Stock (HCS) principles in the world.

As HCV and HCS assessments are nearing completion, APP has begun the process of translating its findings into the Integrated Sustainable Forest Management Plans (ISFMPs), which will set out how the concessions will be run and preserved.

However, in developing these plans, the company has concluded that success in the long term will require commitment from many more of Indonesia’s forestry stakeholders.

Aida Greenbury, APP’s managing director of sustainability and stakeholder engagement, said: “We are creating management plans to ensure the viability of the 2.6 million hectares that our suppliers are responsible for. However, unless all of Indonesia’s land is properly managed too, then the forest landscape will continue to be at risk from further degradation.

“In 2014, we will finalise the largest integrated biodiversity and conservation assessments that have ever been conducted. From these assessments, we have discovered many opportunities and obstacles that we know cannot be realised or resolved by a single company.

“It is time for all parties to get active and start working together. The days of campaigning against businesses that have shown commitment to change the way they operate, as we have, should be brought to a conclusion. Now is the time to focus on the future and to develop solutions to the complex issues associated with forestry in Indonesia and to promote responsible practise.”

Scott Poynton, executive director of The Forest Trust, a non-profit organisation that is helping APP ensure its policy is translated into actual change on the ground, said: “One year in and we have a moratorium on forest clearance in all its suppliers that has proven to be effective. HCV and HCS forest assessments are being completed, a number of social conflicts are now solved, and there is real transparency in reporting progress against its policy.

“We understand that complete trust isn’t built in a day and not even in a single year, but the company is listening to concerns and is ready to continue to implement and improve its FCP implementation. APP is 100 per cent committed to zero deforestation."

As part of its one year anniversary, APP has set out the four key priorities for 2014 that must be addressed by broader industry to bring about zero deforestation. These are:

To mark the FCP’s anniversary, APP is today hosting an event in Jakarta, at which this and other issues can be debated by panellists from APP, TFT, Greenpeace, Ekologika and NGO participants. The panel is moderated by Mongabay’s Rhett Butler.

A recording of the event will be available at www.asiapulppaper.com this week. In addition, Twitter users can follow the discussion using hashtag #APP1yrFCP.

Key highlights of the first year of FCP implementation can be found in APP’s One Year Anniversary Report, available at www.asiapulppaper.com.

Asia Pulp & Paper Group (APP) is a trade name for a group of pulp and paper manufacturing companies in Indonesia and China. The APP Group of companies is one of the world’s largest vertically integrated pulp and paper companies, with an annual combined pulp, paper, and converting products capacity of over 18 million tons. APP-Indonesia and APP-China currently market their products in more than 120 countries across six continents. The majority of APP’s production facilities are Chain-of-Custody certified by SVLK, LEI and PEFC.

APP launched its Sustainability Roadmap Vision 2020 in June 2012 and its Forest Conservation policy in February 2013, to further improve its environmental performance, biodiversity conservation, and protection of community rights. More information can be found at www.asiapulppaper.com. 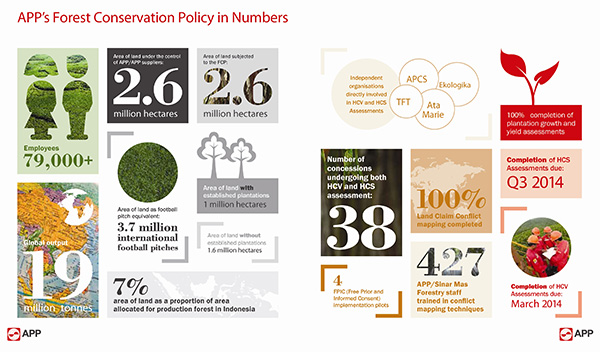