GENEVA, Switzerland--(BUSINESS WIRE)--For half a century, Braun, a member of the P&G family of leading brands (NYSE: PG), has led the way crafting high performance electric shavers, rooted in an uncompromised design philosophy. From the launch of the Braun sixtant SM 31 shaver in 1962, and the trademark Braun micron plus/2000 in 1979, Braun is recognised for an aesthetic of form and function, with a focus on ease of use and consistent breakthrough technical innovation. Since then this legacy, spearheaded by pioneering design legend, Prof. emer. Dr. h.c. Dieter Rams, lives on in Braun’s latest launch the new Series 5. With this ethos Braun shavers in the 21st Century remain unparalleled and at the cutting edge of performance-led design.

Braun’s story first started with the creation of a programme with clear design principles from the nucleus of Braun’s design department, Dieter Rams. The Braun sixtant was a demonstration of this groundbreaking new aesthetic and this design simplicity continued as a hallmark of the brand throughout the decades, not least shown by the Braun micron plus/2000 in 1979. Today, Braun design continues to set benchmarks as an industry design leader, recognised by the man who first started that journey fifty years ago – Dieter Rams. The former Head of Design at Braun (1961-1995) commented: “Having handed over responsibility for the Braun product design 17 years ago, I am now pleased to see that Professor Oliver Grabes, with his team, has reformulated the classic Braun design values. I see that these have been used to redesign the Braun Series 5 shaver.”

With regard to the Braun Series 5, the turbo-performance shaver, Rams is referring to inspiration from a long standing tradition of Braun design heritage. The legacy of these products can all be seen in the design of the new Series 5. The manufacture process of the platinum coated shaver foil has changed little since its first introduction on the sixtant, and the matt black design with geometric shaped switches is instantly recognisable as Braun design. Combined with the hard-and-soft surface design, first revealed on the Braun micron plus/2000, the Series 5 is an illustration of fifty years of consistent quality design and innovation.

Innovation through the ages:

But it started with the Braun sixtant. The small, sleek sixtant was both a technical innovation and a design breakthrough for Braun in 1962 and it has since achieved iconic status. The introduction of the platinum coated shaver foil vastly improved the quality and protection of the shave, allowing dry shaving to compete with wet for the first time. The hexagonal shaving foil holes, that gave the product its name, were no longer punched but produced using a chemical-galvanoplastic method – a method that, in principle, has not changed for the Braun micron plus/2000, and even the new Series 5.

As this technical innovation could not be seen with the naked eye, the new precision of the appliance was conveyed with a design step-change. The colour change to black-matt was a radical move for this type of product and the surface treatment of the plastic with the matt-brushing of the metallic shear blade frame increased the value and the aesthetic of the product considerably. Braun had created an iconic archetype for the electric shaver that defined the category over the decade, selling over 10 million products, and the revolutionary technology and design continued to influence the Braun micron plus/2000 in 1979, and still influences the design of the new Series 5 today.

Designed by Roland Ullmann, in 1979 the Braun micron plus/2000 used the same galvanoplastic shaver foil technology of the Braun sixtant combined with the now typical Braun colour scheme: black housing with silver metal accents. But the micron plus took yet another step forward, setting new standards in design and surface style that still exist in the new Series 5 today. The micron plus combined hard and soft technology for the first time in an appliance – the first example of how surface technology and material could combine to achieve design innovation in a shaver. The 500 soft studs over the whole surface were characteristic of the micron plus but also had a practical use: the appliance had a better grip and did not slide off surfaces. The studded structure quickly became a Braun trademark and feature, even referenced across diverse Braun product categories, along with the now familiar foil technology and colour scheme, on the new Series 5. Further groundbreaking technical innovations of the micron plus were the removable shaving foil magazine, the separately operable long hair trimmer and a patented sliding mechanism. All remain state-of-the-art features that are still in use today as a necessity for any quality shaver.

Braun takes a new pioneering direction founded in tradition, but interpreted in a new and contemporary way with a new design language “The Strength of Pure”. The new Braun Series 5 displays the proven Braun design and technological elements such as the studded structure, hard-soft technology and classic colour design but with a new and modern interpretation that illustrates the new design language. The rigid ergonomic shape relates to the functionality of the appliance and how it connects to the human body; soft elements (as with the micron plus), subtle indents and inverted studs make usage comfortable where the appliance touches the hand; as the micron plus had strived to do over thirty years earlier. The geometric shaped switches, already a clear design choice of the sixtant and micron plus, appear again to express the precision and quality of the technology inside. As with the sixtant, and the micron plus before it, well-considered handling goes hand-in-hand with hard to beat performance. The thumb is the key to ergonomic alignment in the razor and with its soft studded structure, the lock switch for the head simultaneously serves as a rotation point for handling.

Embodying state of the art technology innovation and anchored in a strong Braun design heritage, Braun is proud to have sold over 275 million electric shavers in the last fifty years to men across the globe. The new Braun Series 5 shaver is already available in-store. For more information visit www.braun.com.

Braun, a subsidiary of Procter & Gamble founded in Germany in 1921, develops and manufactures a wide variety of small domestic appliances that marry technical innovation, reliable quality and distinctive design. These range from electric shavers to beauty and hair care appliances. Braun products enjoy worldwide distribution. Please visit http://www.braun.com for the latest news and in-depth information about the Braun brand. 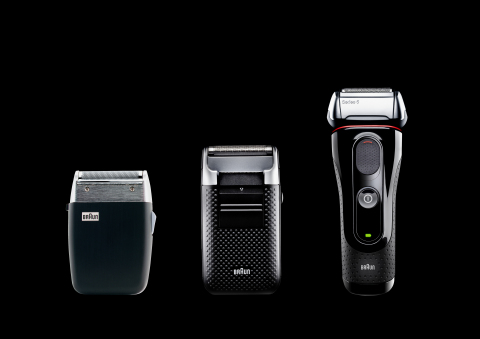