Exploration Target of between 2.4 and 2.6 Billion Tonnes (Bt)

SEMS will conduct the survey works at Kaoua el Kahdra permit 792, one of Charter Pacific's two mining tenements in Mauritania. This will involve a north-south oriented ground magnetic profile survey followed by a second phase infill program where required.

SEMS will also undertake a ground gravity survey consisting of approximately 3000 sample points that will be commenced after the phase one ground magnetic survey.

These surveys are targeted at confirming SEMS earlier analysis that showed that a 300km2 portion of permit 792 offers potential for an exploration target of between 2.4 and 2.6 billion tonnes (Bt) at an average grade ranging between 28 and 32% Fe.

On 24 August 2011, Charter Pacific announced that following collation of publicly available data for permit 792, as well as drilling and gravity surveying in an adjoining third-party project, SEMS had estimated that a 300km2 portion of permit 792 offers potential for an exploration target of between 2.4 and 2.6 billion tonnes (Bt) at an average grade ranging between 28 and 32% Fe. (see CHF ASX announcement of 24 August 2011).

Permit 792 covers a total area of 960 square kilometres and is 250km northeast of the capital, Nouakchott, by paved road. It is located a short distance from the copper-gold mining operations at Guelb Moghrein and the district capital of Akjoujt.

The Cetal tenement (Permit 791) is the northern project of some 498km2, and is located less than 70km south of heavy gauge rail and road infrastructure and a further 180km east, by rail, of the port of Nouadhibou. It lies immediately north and along strike of the eastern most of the two exploration licences of the Lebtheinia iron ore project owned by Sphere Minerals Ltd (ASX:SPH).

Charter Pacific has entered into an agreement with Sonko Lowenthal Mauritanie sarl ("Sonko"), a company incorporated in Mauritania, and the shareholders of Sonko for the potential acquisition of up to 100% interest in Sonko's two Mauritanian iron ore exploration permits (791 and 792) subject to certain conditions and obligations ("Agreement"). 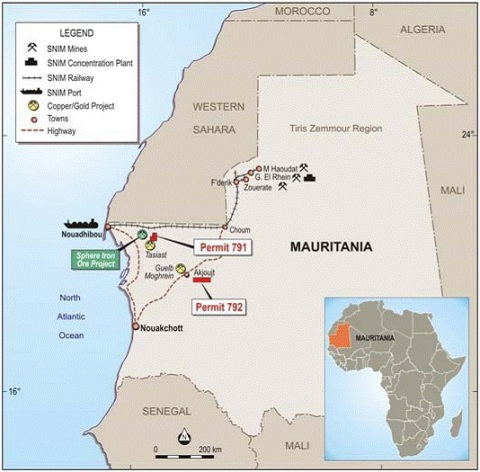 The Kaoua el Khadra tenement (outlined in blue) over total magnetic intensity map. Showing the ground magnetic and gravity survey area of interest in green. At 200 m line spacing the green area requires 2400 line km of ground magnetic (excluding tie lines) and 3000 gravity stations. The magnetic will be performed in two phases of 1200 line km each - one at 400m line spacing and another phase for infill. (Graphic: Business Wire)